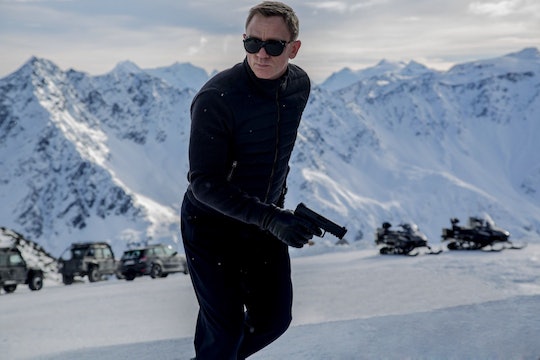 'Spectre' Is The Second-Biggest Bond Movie To Hit Theaters, & Here Are 4 Reasons It Did So Well

On Nov. 6, the newest James Bond installment, Spectre, hit theaters. But I didn't have to tell you that — Spectre's box office total hit $70.4 million in its opening weekend, so it's safe to say many of us have seen it already (and some of you more than once).

Though, with that amount, Spectre didn't quite live up to Skyfall, which picked up $88.3 million in its first weekend (that's what an Adele theme song will do for you), it still finished far ahead of 2006's Casino Royale ($40.8 million) and 2008's Quantum of Solace ($67.5 million). And though anything Bond is sure to be a blockbuster, what is the magic formula Spectre concocted which made it one of the series' biggest hits?

Though the box office has seen quite a few disastrous weekends this year (ahem, Jobs), fortunately the success of Spectre may signal that some great films are on the way. While there was some concern that The Peanuts Movie would overshadow Spectre — and a costly reported rewrite which brought the Spectre’s budget up to $300 million — the action-packed movie still came out on top. And, I mean, who wouldn’t get excited when hearing about Agent 007 taking on 1970 foes in 2016? Because that’s the 24th film’s focus, and it is a great combo of everything classic and cutting-edge.

If you've seen Spectre, are about to see it, or are thinking about seeing it, know this: It is full of throwbacks, flashbacks, and the theatrics we’ve come to known and love. But it is also giving us a ton more to drink up like a martini, shaken, not stirred. Here are # reasons why the movie is doing so well: Here are four reasons why the movie performed so well.

There's no denying it — the blonde Bond is also one of the best Bonds. (Sorry, Timothy Dalton.) Suave, serious, and projecting a sense of danger that a real agent would actually project (unlike lighter-weight Bonds like, say, Pierce Brosnan), Craig is one helluva an anchor for the franchise. Too bad he's taking himself out of the running for a 25th installment.

Like Spectre, "Writing's On The Wall" is no "Skyfall." But, hey, a Bond hit is a Bond hit, and Smith sells sexy, mysterious sadness better than anyone on the Top 40 today.