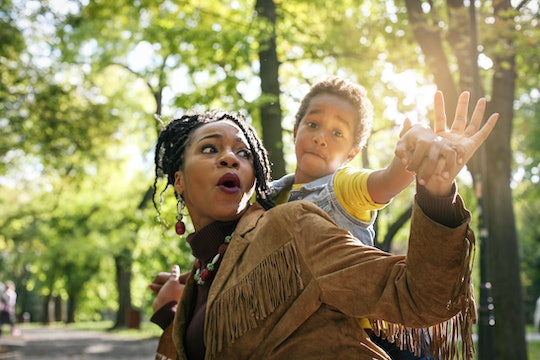 As spring fades into summer and the kids head off to their last days of school, plenty of families are looking forward to spending time together in the great outdoors. There's camping, beach vacations, hiking, and so much more. Of course, if you live near the coast or a national park, it makes accomplishing these activities a bit easier — more so than for people who are essentially city bound. But as it turns out, city-dwelling families should make it a point to become one with nature. Because spending time in nature benefits children's mental health later in life, according to new research.

A new study published in the International Journal of Environmental Health Research found a correlation between growing up with access to nature and better mental health an adult. “What we found is that the childhood experience of green space can actually predict mental health in later life,” study co-author Mark Nieuwenhuijsen told Inverse. “The people that reported more exposure to nature actually have better mental health than those that don’t even after we adjust for exposure at the time of the interview, when they are adults.”

So here's what went down: A total of 3,585 adults — ranging in age from 18 to 75 in four European cities — were surveyed about how often they visited natural spaces as a child and now as an adult, according to IFLScience! Additionally, participants were given a psychological test to see where they were mental health wise.

What researchers found was adults with low levels of childhood nature exposure had "significantly worse" mental health issues, according to IFLScience! Furthermore, they didn't consider natural spaces to be as important in adulthood compared to participants who spent more time outside as children. (It's worth pointing out, however, that the study's authors noted there could potentially be a recall bias, considering the questionnaire only had one question about exposure during childhood and was self-reported.)

Because of this finding, researchers from the Barcelona Institute for Global Health (ISGlobal) are now urging for a change in urban planning moving forward. "Many children in Europe lead an indoors lifestyle, so it would be desirable to make natural outdoor environments available, attractive and safe for them to play in", Nieuwenhuijsen said in a news release. "We make a call on policymakers to improve availability of natural spaces for children and green school yards."

As a parent who is definitely not a fan of the "great outdoors" as a whole, this study is fascinating — and a tad bit troubling — to me. I guess the the key to reaping the benefits is finding the right activities for you and your family. Camping, for example, never was (and still isn't) something I would find enjoyable. But long-distance running on nature trails? Heck yes.

Still, in light of this new study — as well as the many other benefits offered by spending time in nature — I should probably suck it up and do more outside/nature-y activities with my kiddos. Because apparently, it makes more of a difference than I thought.