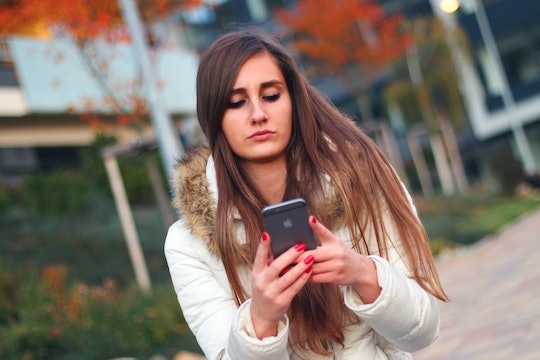 Spending Too Much Time Online May Lead To Depression In Teens, Study Finds

Social media has certainly helped shape our generation and is currently shaping the next one. From babies and toddlers having their own Instagram accounts to teens selling handmade slime over iPhone apps, social media has made kids a lot more independent and has made the world seem smaller (and a lot scarier) at the same time. Of course, there are known dangers to children being online (hello, cyberbullying), but a new study might make parents a little more aware of what is going on in front of their eyes. This is because a new study found that spending too much time online may be linked to depression in teens, warning parents about the dangers of screen exposure.

While parents are warned time and time again about the dangers that the internet might possess, it is important to make note about just how much the internet can affect their children. This is especially pertinent when it comes to teenagers who might already be going through enough — like hormonal and social changes — as it is.

The study, published on Tuesday in Clinical Psychological Science, found that the more time teens spent with any electronic device — whether it be their cellphone, their computer, or their iPad — the more likely they were to display symptoms of depression and suicidal thoughts, according to NPR. What's more, these symptoms were more prevalent in girls.

The study, which sampled and surveyed teens between 8th and 12th grade over the course of five years, found that those teens who spent time on their electronic devices were more likely to report issues with their mental health over teens who spent more time outdoors, in church, or doing homework. While the latter might be activities that you've had to force your teen into doing every once in a while, it might be something you have to make them do for the sake of their happiness.

The study found, according to NPR, that teens who spent time online were more likely to agree to statements about feelings of worthlessness — such as "Life feels meaningless" and "I feel my life is not useful" — as the years went by and experienced an increase in suicidal thoughts, as well.

But it is important to note, according to NPR, that the study found that there is only a correlation between prolonged screen exposure and feelings of alienation — not that one caused the other. The study's lead researcher, San Diego State University psychologist Jean Twenge, told NPR that one or two hours of screen time isn't that big of an issue. But the more that teens hold onto their phones, the riskier it becomes, explaining:

But once you get to three hours [a day] — and especially four, and then really, five hours and beyond — that's where there's much more significant risk of suicide attempts, thinking about suicide, and major depression.

Yet, it might seem hard for parents to force their children to cut down on these hours because having access to a smart phone is just so common. Roughly three quarters of Americans, or 77 percent of people living in the United States, have a smart phone, according to a Pew Research Center report from January. On top of that, seven in 10 Americans use social media and 50 percent of Americans own a tablet. While teens might be around these objects all the time, it doesn't mean they have to be attached to them all the time.

But not only are more teens using electronics, they're also reporting feelings of major depression than ever before, according to TIME. In 2015, 3 million adolescents between the ages of 12 to 17 had one major depressive episode throughout the year, according to the National Institute of Mental Health. This only reiterates the findings from the study.

These feelings of worthlessness and unhappiness could be linked to the fact that studies have found cyberbullying on social media can cause depression in teens, according to HuffPost, and websites like Instagram can have a negative correlation to mental health, according to TIME.

So what can parents do to prevent this? The study found that teens who spent more time doing face-to-face activities, like going to the mall or even attending a party, fared better than those who didn't, according to NPR. So urging your child to spend some time outside or visit their friend in person instead of Snapchatting them, could do the trick.

While it might seem like an incredibly challenging task, asking your teen to cut down on their phone time will help them in the long run. This can be accomplished, according to CNN, by crafting a "tech time out," or asking your kid to leave their smart phone in their room before sitting down to eat dinner. It might not feel like a lot, but an hour without a smart phone could show teens that they don't need it all the time.

This study in no way proves that teens are depressed because of the time they spend in front of their electronics, but it does remind parents to be more aware of their child's electronic usage and ask them to be a little more present in the meantime. It might seem like a lot to ask, but at the end of the day, it'll be worth it.