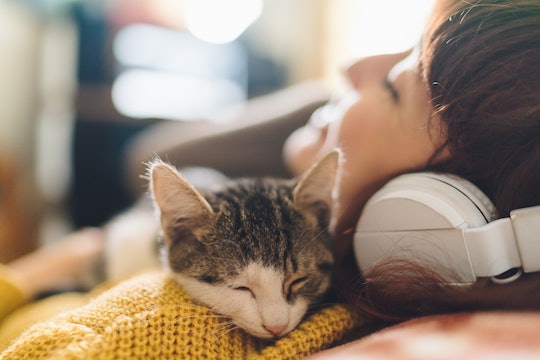 ATTN Fur Mamas: Spotify Will Now Create A Special Playlist For Your Pet

If you're the type of fur mama who doesn't like to leave your pet awaiting your return home in complete silence, you'll be happy to hear that Spotify will now create a playlist for your pet. Whether your furry friend prefers to rock out or mellow out, the digital music service has something for every dog, cat, bird, hamster, or iguana. Best of all? Spotify takes into consideration both your pet's personality and your own listening habits to craft a playlist you can both enjoy.

In a survey of 5,000 users spread across the United States, United Kingdom, Australia, Spain, and Italy, Spotify found that 71% of pet owners reported playing music specifically for their pets. But often, music was a communal affair for pets and pet owners with 69% of owners reporting they sang to their pets and 57% admitting to dancing with their pet. And for this reason, Spotify has created its pet playlist feature.

But just how does Spotify put together your pet's playlist? To start, the music service asks for you to identify what type of pet you're looking to entertain. Users can select from dog, cat, bird, hamster, or reptile. (Spotify has noted it didn't include goldfish, tarantulas, or snakes when crafting its pet playlist feature as, without visible ears, neither of those pets would really be able to appreciate music anyway.)

It then asks you to answer a few questions about your pet so Spotify can determine if Fido is more mellow than energetic or more shy than friendly. This help determine the overall vibe of your pet's playlist. Spotify then combs through your own music preferences and listening habits to put together a playlist for your pet that you more than likely won't mind listening to, too.

I know what you're thinking. Does my pet really care about music?Although Fido isn't likely to have an opinion on Kanye West's latest album, there is evidence that music affects animals. In fact, while a number of scientific studies have confirmed that music can impact our mood and even reduce our blood pressure and anxiety, research has also shown that music can have a similar effect on animals, too. Classical music, for example, was found to have a significant calming effect on shelter dogs while heavy metal music was found to be agitating. And although Spotify noted that "music for pets isn't an exact science," they reportedly consulted with "experts in the pet industry" to identify "the best approximation" of what music might work best for the pet types featured.

So, whether you're convinced your pooch wants to wait out the day on the couch listening to Beethoven's Symphony No. 5 or just a tad curious to see how your cat would react to Taylor Swift's latest hit, it sounds like Spotify can help.