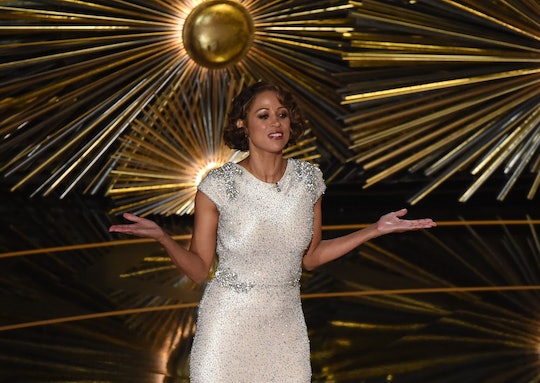 During Chris Rock's sensational opening monologue during the 88th Academy Awards, the lack of diversity, the need for inclusion, and the systemic racism of the Hollywood film industry were center stage. Then someone else took the stage: Stacey Dash. The awkward, "What just happened?" moment left many viewers scratching their heads, but have no fear: Stacey Dash explained her Oscars cameo in a follow-up blog post (and thank god, because after that whole bit, we all needed a lot of answers).

What was most perplexing about Dash's appearance was the context in which she took the stage. While using comedy to highlight the lack of diversity and the #OscarsSoWhite response to this year's Academy Awards, Rock announced a new Director of the Minority Outreach Program, both in jest and in an attempt to increase diversity, only to announce Stacey Dash as the principal of the program, and then ushered her on stage. The former actress-turned-Fox News favorite's comments concerning systemic racism, #BlackLivesMatter, and a multitude of issues plaguing the African American community have kept Dash's name under intense scrutiny. Dash's comments are problematic for multiple reasons, chief among them the fact that Dash doesn't believe Black History Month and BET should exist, and she recently went on Fox & Friends to criticize black actors and actresses for boycotting the Oscars despite the news that the Best Actor and Actress nominee pool would mark the second consecutive year all-white nominees were selected.

It seemed that Rock was poking fun at Dash, an individual who repeatedly hurts the African American community more than she helps, however, Dash has a very different take on the joke. In a blog post titled, Who Is Stacey Dash And Why Did She Just Walk Across The #Oscar Stage, Dash wrote:

When they added ME to increase the diversity, I’m sure many black people rolled their eyes. I’m not “black enough,” they say. But guess what? I’ve heard that all my life. I would rather be a free thinking, black than a cookie cutter black who thinks — and votes — just like all my friends.

Dash is alluding to her conservatism, and her choice not to vote for President Barack Obama a second time in a row. Even in the blog post, Dash admitted that while she voted for Obama in 2008, she didn't "make the same mistake twice," and voted for Romney in 2012. Dash believes that African Americans voted for Obama simply because he, too, is African American. Even tough many saw Rock's announcement of a new Directory of the Minority Outreach Program — and Stacey's odd, awkward appearance — as a perfectly executed joke, Dash saw it as an opportunity to truly make the Oscars more diverse. Not with her ethnicity, but with her politics:

Yes, I’m the actress from the South Bronx who has always dreamed of winning an Oscar. But God has a great sense of humor and this is my first encounter with one of my dreams of destiny. Bringing diversity to Hollywood… not merely because of color, but politics as well. (After all, different colors of skin is an easy kind of diversity. Ideological diversity is much harder, because it forces everyone to come face to face with actual beliefs. Hollywood needs BOTH.)

While Dash isn't wrong — ideological diversity is crucial and an important part of living in a safe and inclusive society — she isn't right, either. If skin color was an "easy kind of diversity," Hollywood wouldn't (or at least, shouldn't) have a problem highlighting diversity in film, writing, and directing. But it is an issue, and it is a problem, and it is really important that these issues and problems are continually discussed and fixed, because representation and visibility matter. If Dash cared about truly representing her community, she’d care about that.