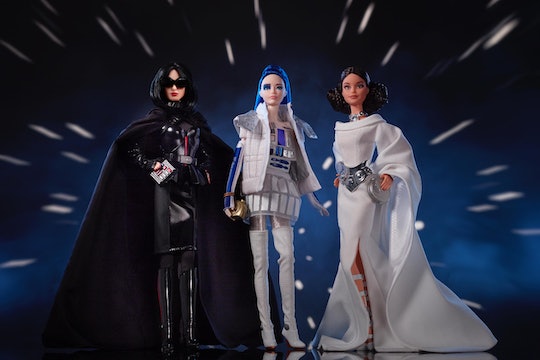 Hold on to your light sabers, friends, this is exciting news: Mattel has teamed up with Disney to create a line of Star Wars-themed Barbies. This unique celebration of Star Wars: A New Hope is currently available for pre-order, with the iconic movie and doll collaboration hitting stores this fall. Inspired by the film's original concept art, the Star Wars x Barbie partnership re-imagines iconic characters through a distinctive Barbie high fashion filter. The cosplay-like dolls wear glamorous outfits in an homage to Darth Vader, R2-D2, and Princess Leia, as only Barbie can.

I have to admit this has my inner 8-year-old very excited. I was never much of a baby doll fan; it was Barbie or bust for me from an early age (we're talking an enormous collection of dolls, outfits, townhouse, pool, and shiny pink Corvette, to name a few items). Did I keep them around a little longer than I should have? Probably. But that's a discussion for another day. I also loved the Star Wars franchise. My brother and I watched each movie as soon as it came out, and I even dressed up as Princess Leia for Halloween one year. We had several of the Star Wars action figures, and longed for a Jedi Cruiser, like most kids we knew. To say the movies have had a significant impact on our culture is a bit of an understatement. Honestly, I would wager that introducing Han Solo, Luke, Princess Leia, and friends to our children has been one of my husband's greatest parenting moments thus far.

Now, as any collector will tell you, collecting comes at a price. Picking up a Star Wars-themed Barbie doll will set you back $100, so this is definitely more of a "sit on a shelf" display item than it is one to play with, but for super fans of Star Wars and Barbie, well, I don't think it gets more perfect. Each doll includes a stand and Certificate of Authenticity.

Princess Leia Organa was one of the Rebel Alliance’s greatest leaders, fearless on the battlefield, dedicated to ending the tyranny of the Empire and let's not forget, she made side hair buns a total fashion moment. This collectible Star Wars x Barbie doll captures Princess Leia’s iconic look in an elegant white gown with dramatic, floor-length sleeves, a silvery peplum belt, strappy heels, and coordinating cuff jewelry. I have to think that Carrie Fisher would have loved this homage so much, and I imagine her legions of fans will as well.

Once a heroic Jedi Knight, Darth Vader was seduced by the dark side of the Force, became a Sith Lord, and led the Empire’s eradication of the Jedi Order. OK, so maybe not the nicest person ever, but definitely a memorable villain. This collectible Star Wars x Barbie doll captures Darth Vader’s Sith armor silhouette in a head-to-toe shiny black "leather" ensemble. Additional details include metallic on her collar and waist, dark glasses, black cape, and purse decorated with Darth's breastplate.

R2-D2 brings a lovable, comic element to Star Wars, and we love the astromech droid for it. Not only funny, R2-D2 is a skilled starship mechanic and fighter pilot’s assistant, and he showed great bravery in rescuing his masters and their friends from many misadventures along the way. The Star Wars R2-D2 x Barbie doll captures the lovable droid’s look in a geometric ensemble with a dome skirt, bomber jacket, thigh-high boots over silvery tights, and a gold clutch. A vibrant blue ponytail and “radar eye” detail complete the look.

The force is strong with this collaboration, friends. Will you get one?