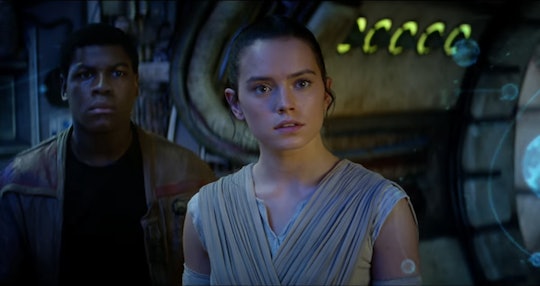 'Star Wars: Episode VIII' Delayed By Seven Months, But The Wait Will Be Worth It

Yes, grieving Star Wars fans, the rumors are true. On Wednesday, Disney announced that it had delayed the release of Star Wars: Episode VIII by seven months, pushing its debut to December 2017 from May of that same year. Go ahead, feel all the feels with me.

According to The Hollywood Reporter, the behemoth franchise has been replaced by a fifth installment of the popular Pirates of the Caribbean, which had originally been slated for July 2017. Good news for Johnny Depp fans I suppose, but terrible, terrible news for devoted BB-8 fanboys and fangirls.

"The move follows the extraordinary success of Star Wars: The Force Awakens, which was the first Star Wars movie to premiere outside the traditional summer blockbuster window and smashed numerous records," Lucasfilm and Disney execs said in a statement this week. "Star Wars: Episode VIII is currently in preproduction and will begin principal photography in London next month."

THR's source added that the decision was made in order to give Episode VIII "the same Christmas treatment" as The Force Awakens, which has so far raked in a global haul of some $1.87 billion dollars. "News that Episode VIII will now open Dec. 15 likely won't be well received by Steven Spielberg and Warner Bros., who are set to open Ready Player One on that date," the publication remarked on Wednesday. (If that's not the understatement of the century, I'm not sure what is.)

In Disney's defense, the delay will allow J.J. Abrams (who's given up the director chair to work as an executive producer on Episode VIII) and director/writer Rian Johnson more time to fine tune the massive eighth installment, which is set to include The Force Awakens cast members Daisy Ridley, John Boyega, Oscar Isaac, and Mark Hamill.

Despite the delay, fans should be prepared for another uniquely amazing experience once Episode VIII does open: According to longtime friend and actor Greg Grunberg, even Abrams has expressed regret in not taking up the director's reins for the next Star Wars installment, remarking dolefully upon reading the script that it was "so good", he wished he were making it.

"He read it and said something he never, ever says," said Grunberg, who portrays X-Wing pilot Snap Wexley, in an interview with The Washington Post last month. "[I've never heard] him express regret like that."

According to Variety, Abrams isn't alone in his fervent endorsement of Episode VIII. "It's very good," Ridley enthused in an interview with the outlet last month. "Very good." Of the filming process itself, which is set to begin in a few weeks, she added, "To be able to spend time with that, and work with people who really see something in you that you didn’t see before ... is ultimate."

It seems that, for now, Star Wars fans will have to get their Rey, Finn, Poe, and Kylo Ren fix by nabbing a few more screenings of the monster success that is The Force Awakens. Not that, you know, anyone will mind that.