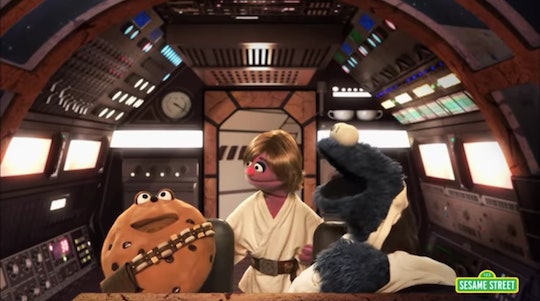 Although it's not technically an official holiday, Star Wars fans have long celebrated May 4 as Star Wars Day. And, sure, watching one, or all, of the Star Wars films is certainly a fitting way to mark the day, there are other ways to celebrate. This year, why not get the kids involved and commemorate George Lucas' franchise with Big Bird and the gang at Sesame Street. To celebrate May 4th and beyond, here are a few times Star Wars and Sesame Street have collided.

At first glance it may seem like Star Wars, a media franchise created by Lucas around a series of space-opera films, and Sesame Street, an educational children's television show starring a cast of muppets, have little in common. And while it's true that you won't find explosions, epic lightsaber battles, or princesses in metal bikini slave uniforms on Sesame Street, there is one important connection between the two media franchises: puppeteer Frank Oz.

Before giving voicing and puppeteering Yoda in Return of the Jedi (and then later The Phantom Menace, Attack of the Clones, and Revenge of the Sith) Oz was known for being the performer behind Grover, Bert, and Cookie Monster on Sesame Street.