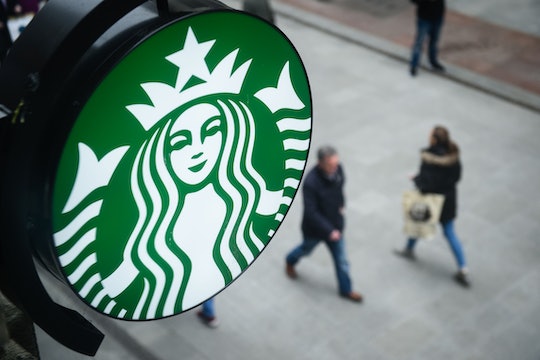 Many people like Starbucks for the steady supply of caffeine and seasonal cheer it provides — but as of this week, Starbucks employees have another reason to love the coffee giant. Starbucks' new expanded parental leave policy for corporate employees is more generous than before, and as of October this year, parents can look forward to more time at home with their newborns — and a little more help with the costs of raising a tiny human.

Starbucks' current parental leave program allows birth mothers to take six weeks of paid leave after their child's birth, and during that time, moms are paid 67 percent of their usual pay. But now, the company is improving its parental leave policy for parents working within it's corporate ranks, including birth moms, dads, same-sex parents, and adoptive couples. Under Starbucks' new policy, births moms can look forward to 100 percent of their pay for six weeks, along with up to twelve weeks of unpaid leave on top of that. (Of note: This doesn't apply to parents or mothers who work in-store — those who work outside of Starbucks stores, such as district managers and those working at Starbucks' corporate office, will get a full 18 weeks' paid leave.) Non-birth parents can claim up to 12 weeks of unpaid leave when their child is born, a federal policy established by the Family and Medical Leave Act of 1993 (FMLA).

Any one of Starbucks' 160,000 corporate U.S.-based employees who work an average of 20 hours or more during a week will be eligible for the new, expanded benefits. "While we have made substantial investments in our partners, we want to continue to do more," Kevin Johnson, Starbucks president and chief operating officer, said in a statement. “This is one of many steps we are actively taking to evolve our benefits and create a Partner Experience that lives up to our aspirations.”

Even Starbucks' earlier parental policy was a big step up from what's required by federal law, which is a simple 12 weeks of unpaid leave for mothers — and those requirements only apply to certain companies (such as public agencies and companies with over 50 employees). Employees also need to have been with their employers for at least a year before gaining access to those benefits.

According to PLUS, an organization that advocates for paid family leave in the United States, this new policy unfortunately does not include store-employees. Those workers are still eligible for up to six weeks of paid maternity leave, but there's still work to be done on including non-birth parents and fathers in that policy. Hopefully with the establishment of this new corporate policy, in-store workers will get a boost soon as well.

"We’re excited that Starbucks is extending paid leave for so many of their employees, but this new policy still leaves out fathers and adoptive who work in Starbucks stores, factories, or in other non-corporate roles," PLUS Founder Katie Bethell told Romper in an email. "If dads and adoptive parents in corporate HQ deserve paid leave, then so do the fathers who pour our coffee every day."

Despite the remaining shortcomings, we can all give Starbucks a round of applause, because paid maternity leave is correlated with lower levels of depression for mothers, higher rates of breastfeeding, and better child immunization. Hopefully, the current trend towards increasing parental leave benefits will continue throughout the United States — and if it could influence federally mandated parental leave policies, too, that would be great news for everyone involved.