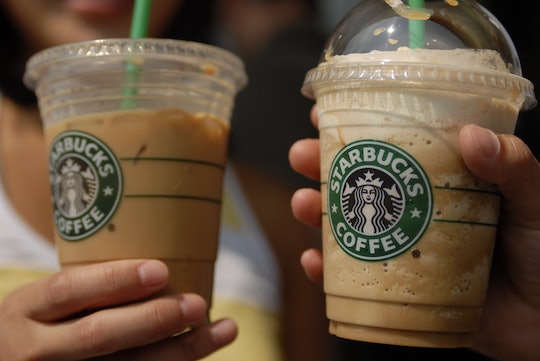 Today, You Can Magically Get 2 Of Your Favorite Starbucks Drinks For The Price Of 1

I am a mom of two, a graduate student, a writer, and an insomniac. Therefore, I am also a rabid coffee drinker, and Starbucks has the trifecta of good things in this world: coffee, seasonal flavorings that make me happy, and free wifi. Now, two days ahead of National Coffee Day, Starbucks is offering a sweet deal on handcrafted espresso beverages and Frappuccinos grande sized or larger. It's buy one, get one free today, Sept. 27 from 3 p.m. to close. That's right, Starbucks Happy Hour, and you'll want to get in on all that pumpkin spice and mocha goodness.

This deal is for Starbucks loyalty members only, but Starbucks is providing a code to sign up for the deal on their happy hour page. Starbucks frequently has pretty great deals, in spite of the fact that they've recently taken some serious heat for changes made to their loyalty programming and how the stars are calculated. Since then, I've noticed that they've been offering more flash deals like today's BOGO deal. Whether or not that's in effort to soothe the irritation over the change in the stars program or not, I can only guess, but many coffee drinkers will be grateful for these deals.

Fun fact: I am a bit of a Starbucks recipe genius. You've undoubtedly heard about the secret menu at Starbucks, but you haven't heard about any of my diabolical creations. I am a coffee snob. While I love making my own tricked-out iced coffee at home, I don't always have the time, and I love the ease of sliding into Starbucks' DMs — or ordering app, whatever — and getting exactly what I want, when I want it.

Right now, my favorite drink is a grande latte made with half cream, half whole milk, two pumps of pumpkin spice, and one pump of mocha. Top it with salted cream. If it sounds rich as Kanye, that's because it is. It's also one of the most delicious beverages you'll ever encounter. It doesn't have a name. I am terrible at names. That's why both my kids are named for relatives — it was simple and clean, and also made people feel special.

Do you know what makes me feel special? The fact that it's BOGO at Starbucks and my husband isn't working tonight. I am going to take my sweet time walking to the Starbucks that's a full two miles from my house, sitting down, getting a latte, drinking it, and then drinking my second.

It's not just for lattes, though. It's also for Frappuccinos, and that makes it perfect for a parent-child outing. You get a gigantic latte with all the toppings and multiple shots of espresso, and your little one can have a tasty strawberry Frappuccino with whipped cream and freeze-dried strawberries for a little textural contrast. Just be sure to get there after 3 p.m. or else you'll be paying for both.

Lines do tend to get a little long during these sales, but in-app ordering and off-time attendance can help. If you show up right after 5 p.m., you're going to be overwhelmed. Also, any Starbucks within a mile radius of a college will be busier today than most others. I can assure you that as a graduate student, I've waited on these lines for days. It's worth it though. Who doesn't want or need an extra serving of coffee after the week we've all had? I know that I will personally be drinking my feelings this evening with whipped cream, crunchy topping, and accompanied by whatever happy indie music they're playing. I have a feeling you will be, too.