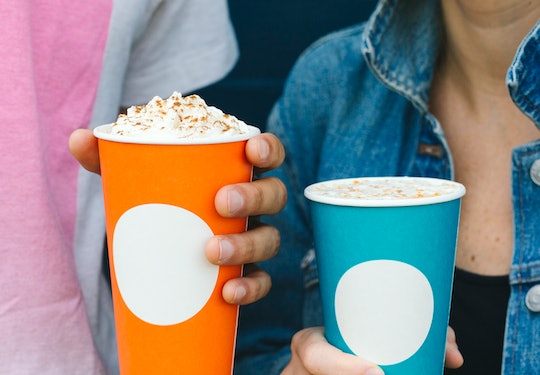 Guys, Friday marks the official start of fall, and you know what that means: Starbucks is releasing its limited edition fall cups today to kickstart the season properly. There are six new cups in total, with different colors for each cup size, and some come pre-decorated in autumnal themes, while others leave space for you to doodle your own creative designs where a Starbucks logo would usually go. And yes, you guessed it — these cups are going to look way too good when filled with your Pumpkin Spice Latte and snapshotted on Instagram alongside your plaid scarf (#SorryNotSorry).

The tall cup is a plum shade, while grandes are blue and venti cups are orange. Each cup comes with a version adorned only with a blank, white circles for your own doodles, as well as with a pre-decorated version (the tall contains a drawing of a pie, the grande shows off an adorable owl, and the venti has a pumpkin drawn on it).

Do the cups look somewhat familiar to you? They should, since they're similar to the Spring 2017 cups Starbucks released earlier this year. Those also featured blank drawing spaces — with a few pre-decorated cups — and came in chipper pastel colors.

Last winter, Starbucks also encouraged its customers to get creative with a limited edition holiday cup, keeping the design a simple red with plenty of room for doodling. The company shared pictures of red cup drawings crafted by artists like Sam Larson and had customers share pictures of their creations under the hashtag #RedCupArt.

Along with its fall cups, Starbucks also introduced a new fall drink to give its Pumpkin Spice Latte a bit of healthy competition. The Maple Pecan Latte is made with espresso and tastes like a combo of maple syrup, pecan, and brown butter. As someone who has never been all that crazy about pumpkins in sweet dishes (give me savory roast pumpkin any day, though), this new latte might just be my jam. After all, a few Twitter users are already calling the new drink "heaven" (in various states of all-caps).

On social media, Starbucks fans quickly shared their feelings about the new fall cups, and most reacted with love at first sight. A few people, of course, were less excited, but most people were feeling the simple design:

If you're looking for that Starbucks fall love with a smaller environmental footprint, Starbucks also has plenty of autumnal merchandise available in its store, so you can get that hit of fall excitement without throwing extra cups in the recycling or garbage bin at the end of the day. There are even a couple of orange tumblers that match the limited edition disposable venti cup pretty well.

The East Coast might be getting a warmer fall than usual, but you better believe customers will be lining up for some toasty lattes in the new themed cups — regardless of the weather — while they last. If you're really feeling the cup but not the sunnier weather outdoors, maybe your barista will sneak you a frappuccino in a limited edition cup (if you ask nicely).

The cups will be available at Starbucks stores in the United States starting Friday, and they'll probably stick around until the end of fall, when customers get to meet another new round of red holiday cups. Enjoy the fall cups while they're still around, and prepare to see friends toting Starbucks cups in their Instagram pictures (along with oversized scarves, boots, and toques, of course) as well as sharing their #FallCupArt (is that a hashtag yet?).