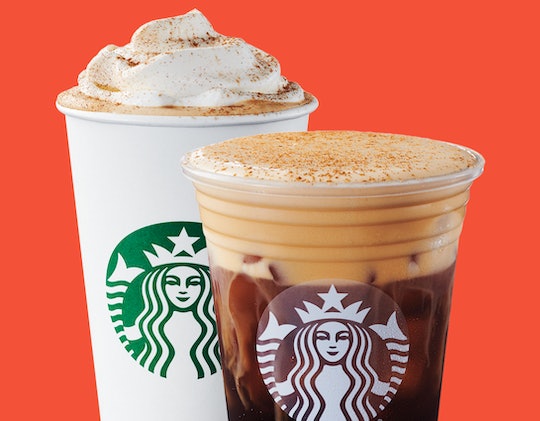 You know how the groundhog seeing its shadow means spring starts early? Well, Starbucks just brought their famous Pumpkin Spice Lattes back to stores a full month ahead of schedule, signaling the official beginning of fall for coffee lovers everywhere. A myriad of other autumnal beverages and treats that will put you in the mood for sweater weather are rolling out early too, like the Starbucks Pumpkin Cream Cold Brew. *starts playing It's The Great Pumpkin, Charlie Brown special immediately.*

Summer isn't actually over until late September when the fall equinox hits, but Starbucks is giving consumers an entire extra month of autumn, though it should probably be called Pumpkin Spice Latte season at this point. As their website states the Starbucks full line of fall drinks will drop in the U.S. and Canada locations on Aug. 27, including the famous PSL that's the subject of so many internet memes. So pull out your scarves, flannels, and get ready to snuggle up with the caffeinated pumpkin drink you've been dreaming of since last November. (You may sweat while you drink it for the next few weeks, but that's just the price of love.)

But the PSL isn't the only product you may want to get a taste of during Starbucks' extended fall season. Their Salted Caramel Mocha is also really popular, but their latest addition will be the talk of the town. Meet the first new pumpkin flavored coffee beverage Starbucks has released in 16 years: the Pumpkin Cream Cold Brew.

This new drink still has the pumpkin flavor you're craving, but the cold brew takes a more subtle approach than the PSL. It mostly consists of Starbucks Cold Brew and vanilla, but it's topped with a pumpkin cream cold foam, which is made with real pumpkins by the way. The final touch is a dusting of pumpkin spice topping on the top to give the drink an extra edge. It's festive without being too sweet, making it ideal for consumers who want to get in on the fall fun but can't stomach the full PSL.

And if you're not a fan of coffee, you can still enjoy the seasonal offerings at Starbucks thanks to their fall foods. They have specialty Pumpkin Cream Cheese Muffins, yummy Pumpkin Scones, a cute cat Cake Pop that's Halloween goals, and Pumpkin Spice Madeleines that will hit the spot, as well as their usual food items. The treats will be available starting on Aug. 27 as well.

It looks like your biggest struggle is going to be deciding which pumpkin drinks and treats to try first. But have no fear, you can try both the PSL and the new Cold Brew for the price of one if you head to Starbucks on Thursday, Aug. 28 after 3:00 p.m. for their buy-one-get-one promotion on handcrafted beverages, according to the press release. You can grab the drinks on your way to the carpool line, or use the deal as an excuse to catch up with a friend over coffee. But don't fret if you can't make it then — you have an additional four months to enjoy the drinks. For once, time is on your side.

More Like This
10 Thanksgiving Desserts That Aren’t Pumpkin Pie
20 Holiday Gifts For Neighbors They’re Sure To Love
HelloFresh Is Releasing Spaghetti Meal Kits Inspired By Buddy The Elf
Store-Bought Meals Didn’t Ruin Our Holidays. They Made Them.