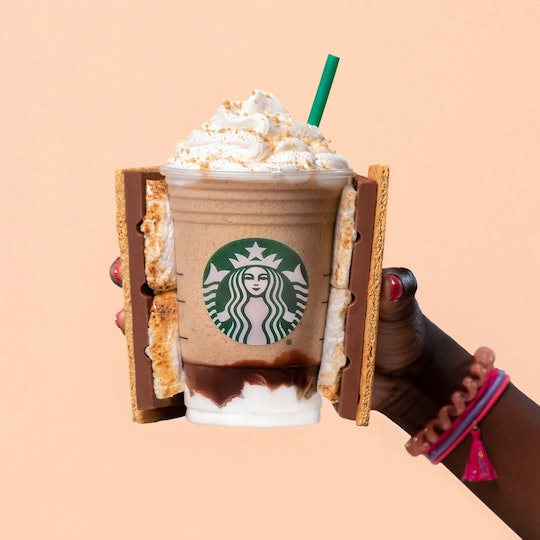 Starbucks S'mores Frappuccino Is Coming Back, & It Feels Like Summer Camp Already

To me, there is nothing more summery than gathering around a bonfire late at night, making copious amounts of s'mores and spending time with friends and family. As soon as I heard that Starbucks was releasing a S'mores Frappuccino, I knew that I needed it in my life. The first time I drank one, it was a revelation. There was marshmallow fluff, chocolate syrup, and a graham cracker crumble that made life worth living. And then, as Starbucks is wont to do, they took it away from me, leaving me bereft. But now, Starbucks S'mores Frappuccino is coming back on April 30, and I am here for it.

The original roll out of the S'mores Frappuccino was a huge success. According to Starbucks, the loyalty of its fans rivals that of the devotion of pumpkin spice lovers. I would argue that they are not mutually exclusive. I will have you know that I can love both at the same time, and I would actually enjoy a S'mores PSL mashup. (Make it happen, Starbucks.) But it's a summer only beverage at the popular coffee shop, so it's no doubt that fans will be going back as often as possible to get their S'mores Frappuccino fix.

Thankfully, you don't have to wait until April 30 to get some S'mores coffee in your life. Starbucks also has released the exclusive "Golden S'Mores" flavored ground coffee and K-cups, which are in stores now. I'm actually having Postmates bring some to me right now, because I am naturally an impatient person, and I need more caffeine in my life.

In honor of the fact that Starbucks' S'mores Frappuccino is coming back, I thought I would give you a few "off menu" customizations for the drink that I find to be utterly divine. My first tip is to ask them to add a splash of heavy cream to the Frapp. It gives it a richer, creamier taste, and if it's just a splash, it's not killing you with calories any more than the drink already is. Also, add two extra shots of espresso for the grande size and three for venti. This cuts down on the sweetness without lessening the amount of marshmallow wonder you're going to get. Another pro tip is to ask them to salt the whipped cream on top. It sounds weird, but trust me, it will blow your mind. It is life-changing.

Starbucks announced the official return of the S'mores Frapp in a post on their Instagram today, and it seems like it wasn't a moment too soon, People on social media have apparently been hounding the brand, demanding the return of their favorite summer beverage. Personally, I've just asked my barista every single visit when in the everloving heck they were bringing it back. Now I know, and the nice dude who makes my coffee can do so without being harassed from now on. At least until I start asking about my PSL. Apparently my annoying habits cannot be curbed.

My husband once had the audacity to ask me why I didn't just make my "own S'mores Frappuccino at home." First of all, how dare he. Secondly, the ratios of fluffy whipped cream to chocolate sauce to graham crumble is perfect and I cannot imagine being able to replicate such an amazing creation to a standard that would make me happy.

Thank all of the heavens that I only have to wait a mere six more days before I belly up to the barista and get my grande S'mores Frappuccino (splash of heavy cream, two extra shots of blonde espresso, please). Because the wait has been too long.

More Like This
These Oktoberfest Instagram Captions Will Get Likes & Prosts
Eden Grinshpan On Getting Your Kids To Love Fish Eyeballs (Yes, Really!)
The Best Apple Orchards Near Upstate New York
16 After-School Snacks For Hangry Kids