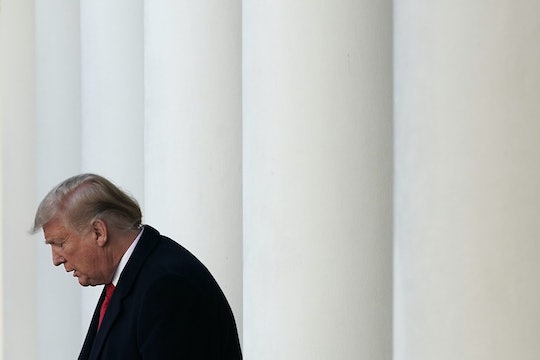 State Of The Union 2019: Here Are 6 Topics Trump Needs To Address Tonight

On Tuesday evening, President Donald Trump will be delivering his second State of the Union speech, an address in which sitting presidents can at once communicate with Congress and the American people about the current state of affairs within the country, as well as make a case for issues that need more attention. For those who are keeping up, here are six topics Trump's SOTU address will probably touch on tonight.

This year's address actually got pushed back due to the government shutdown, as The New York Times reported, which highlights one important issue that Trump will likely talk about: immigration reform, and his push for a southern border wall. Other than that, he will likely use the speech as an opportunity to talk about his other objectives, including military presence in Syria and Afghanistan, new abortion proceedings, infrastructure and the 2020 election.

If you're going to be tuning in tonight, you might want to get a comfortable seat, because CNN reported that State of the Unions tend to be long, with last year's address clocking in at a total of 80 minutes.

Despite the inevitability of a push for his party's agenda, Trump did begin last year's address with a call for unity. “Tonight, I call upon all of us to set aside our differences, to seek common ground and to summon the unity we need to deliver for the people,” The Hill reported he said last year, adding, “So let us begin tonight by recognizing that the state of our union is strong because our people are strong. And together, we are building a safe, strong and proud America.”

And tonight, here are five pressing issues he should and is expected to address.

The first issue that Trump will likely discuss is immigration reform, and most significantly, funding for a southern border wall, an issue that caused a record-breaking government shutdown early this year, as NPR reported.

It's likely that Trump will continue to make the case for funding the wall, perhaps even pushing the "crisis" narrative. Previously, CNN reported that Trump said he'd "shut down the government again" in the middle of February if an agreement on funding wasn't reached.

One issue that Trump will likely touch on is his 10-year plan to make HIV a nonissue in the United States. Vox reported that past sitting presidents have also announced plans to cure massive diseases during their State of the Union addresses; Bush declaring a means to "turn the tide" against AIDS in 2003, and Obama calling for a shot to cure cancer in 2016.

However, Trump will likely be talking about antiretroviral treatment, according to POZ and Vox, which is a treatment method that suppresses the virus to the point that it is undetectable — and untransmittable — in blood.

Trump will also likely talk about his decision to reduce American troops in Syria and Afghanistan, a decision he made at the very end of 2018, MarketWatch reported.

His initial plan was to return about 7,000 troops home from Afghanistan last month, which would be the beginning of a complete phasing out of troops over the coming months. The New York Times reported that Trump will likely offer a rationale for this decision tonight.

Just last week, The Washington Post reported that Trump and President Xi of China have been "inching closer" to coming to an agreement regarding trade and tariff, an issue that has "rattled the global economy," the paper reported.

In fact, CNBC reported that after their December meetings, Trump and Xi have agreed to a "temporary truce" in which Trump says he would not carry on with his plan for an increased tariff rate on over $200 billion of goods. Despite the apparent setback, Trump still says he and Xi are closer than "any Presidents ever have been" from their respective countries.

Another hot button issue Trump might address is abortion, as USA Today reported, given that New York State just passed groundbreaking legislation that legalizes third trimester abortion in the case of extreme medical necessity, according to FactCheck.org.

Despite the specific requirements to attain it, many people have been outspoken about believing the ruling is amoral, which Trump may or may not speak to this evening. Though previously being pro-choice, BBC reported that Trump has since changed his stance to a staunch pro-life.

Lastly, but perhaps most significantly, Trump will surely be making comments and remarks regarding next year's presidential election, making his case for reelection. In attendance of the address will be multiple Democratic candidates for the 2020 election, The Washington Post already reported, meaning that the pressure will be on.

After Trump's remarks, Stacey Abrams will be delivering the Democratic response to his address, adding what she believes her party sees and wants to prioritize going forward, ABC News reported.

Tonight will serve as not only a capstone of everything that's happened in the past year of Trump's term, but what we can possibly expect going forward. It's an important moment in politics, so be sure to stay tuned.