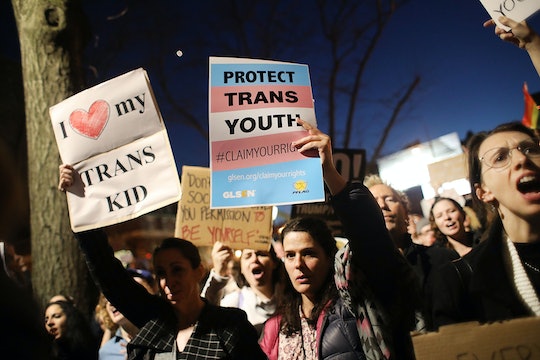 How States Are Failing Transgender Youth

The transgender and gender non-conforming (TGNC) community are often forgotten — and denied — when it comes to laws that could explicitly protect them in vulnerable situations. The Trump administration, for instance, reversed an Obama-era protection earlier this year that gave transgender students in public schools the choice to use the bathroom that corresponded with their gender identity. Now, a new report published today shows that this lack of protection doesn't just exist at the federal level; Nearly all 50 states are failing transgender youth at an alarming rate.

The first comprehensive report of its kind — co-authored by Lambda Legal, Children’s Rights, and the Center for the Study of Social Policy — looked at the laws and policy protections in place for TGNC youth in child welfare, juvenile justice, and runaway and homeless youth systems (also known as “out-of-home care systems) across the country. The researchers ultimately found that TGNC youth are “dramatically overrepresented” in these systems and too often face discrimination in the programs because of the way the “out-of-home systems” define gender and segregate kids and teens within these standards.

So rather than running these essential facilities by actual laws and inclusive practices, a growing number of providers turn “recommended practice into reality to the benefit of TGNC youth in their care,” according to the study, entitled “Safe Havens: Closing the Gap Between Recommended Practice and Reality for Transgender and Gender-Expansive Youth in Out-of-Home Care.”

"It’s critical for policymakers, administrators and service providers as they do essential reform work to these systems to listen to the voices of TGNC youth to ensure their safety and well-being," Currey Cook, a co-author of the report, wrote of the study's findings. "TGNC youth face unique challenges when they come into contact with out-of-home care systems because most placements and facilities are sex-specific and too often don’t affirm their identities."

Cook's recommendations are valid, considering that of the 1.6 million young people who experience homelessness and rely on these systems each year. TGNC youth — as well as those who identify as lesbian, gay, and bisexual — represent 40 percent of this shocking figure, according to the True Colors Fund.

According to the report, New York and California are the only states to have comprehensive protections in place to protect this young community across all of their out-of-home care systems. Meanwhile, Alaska and North Carolina have none.

Additionally, the report found that only four states have "statutory or regulatory guidance regarding placement of transgender youth in accordance with their gender identities in out-of-home care," while only 27 states and Washington D.C. "explicitly include sexual orientation and gender identity in non-discrimination protections specific to the child welfare system."

To overcome this lack of protections, among other suggestions, the report recommends that all states adopt regulations and practices that allow placement to align with these young people's gender identity and to include the TGNC youth to ensure that their voices are part of policy development so that they don't face the same type of harmful discrimination or abuse they experienced outside the system.

Understanding the problem is the first step in fixing it. Youth in child welfare — no matter how they identify — deserve to be protected, especially when in such a difficult situation, and given every opportunity to succeed in the future. But without widespread legislative protections in place, the TGNC youth will still be denied these rights and sense of safety.