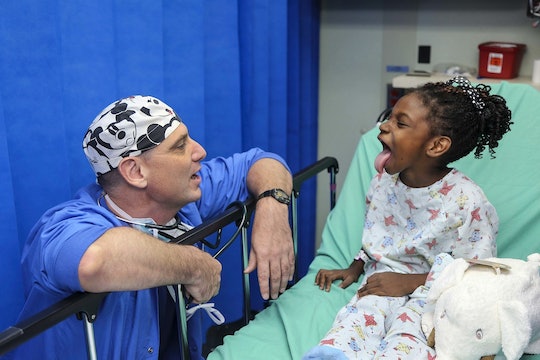 These Statistics About Kids' Health Since The 1980s Will Frustrate Parents

Kids are healthier today than when their parents were kids. That's no surprise. But statistics about kids' overall health since 1980 shed some light on why that is, and in what areas we're still failing American children. According to a report by the Department of Health and Human Services, back in 1980, 4.3 percent of kids under 18 were reported to be in fair or poor health. But the most recent National Health Interview Survey shows that just 1.7 percent of today's kids fall into those two categories, with the rest rated as being in good, very good, or excellent health.

The modern survey analyzes several different variables, and a few have a very clear impact on kids' overall health. While only 1.1 percent of kids with college-educated parents are in fair or poor health, that number rises to 2.4 percent for kids whose parents have only a high school diploma or GED, and 4.4 percent for kids whose parents did not complete high school. Family income is also a strong indicator of how healthy a child will be; 3.6 percent of kids in households making less than $35,000 per year are in fair or poor health, compared to only 0.6 percent of kids in households earning more than $75,000.

Neither of these are particularly surprising; the better a person's education, the more they earn, and the more they earn, the more easily they can afford to keep their kids healthy. Here's where it gets interesting: only 0.7 percent of kids on private insurance plans are in fair or poor health, versus 1.6 percent of uninsured kids. One might expect the overall health of kids on Medicaid or other public health assistance plans to be similar to those with private insurance, but in fact, it's actually much worse. The most recent data shows that 3.4 percent of kids on public health plans are in fair or poor health, nearly five times the number of kids on private plans, and more than double the rate of kids with no insurance.

The starkest difference the report revealed was that a staggering 6.2 percent of American Indian or Alaska Native children are in fair or poor health, while the rates for children of all other races fell between just 1.1 and 2.8 percent. Only 37 percent are in excellent health, versus 50 to 64 percent of all other kids. According to a 2015 analysis by the Kaiser Family Foundation, 50 percent of American Indian or Alaska Native children are covered by Medicaid or other public health plans, and they have the highest rate of uninsured children, at 16 percent. Affordable health care is a laudable goal, but now it's time to step up that goal to adequate and affordable care, because our most vulnerable citizens deserve better.