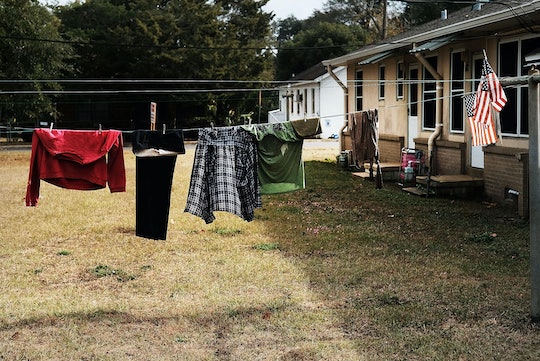 Stats On Lack Of Sleep & Income Are Scary

Everyone has had those days where they don't get enough sleep — and mothers who juggle work and toddlers are especially familiar with that scenario. However, those living with the added burden of a low income may find it even more difficult to get some shuteye: Research has found a connection between lack of sleep and low-income families that proves that the United States' poorest communities are also, unfortunately, its least well-rested.

According to The Atlantic, those with lower income levels and less education are far more likely to nab less sleep every night — usually under seven hours. A 2013 Gallup poll found that 48 percent of Americans who earn under $30,000 a year sleep less than six hours a night, while 66 percent of those who earn over $75,000 get at least seven hours of sleep a night.

According to the World Bank, it's not clear whether poverty leads to less sleep or vice versa — but the correlation is definitely there. And it doesn't only affect the adults in poor families: children from lower income families tend to get less sleep, and the sleep they do get is of lower quality. They're also more prone to sleep disorders.

If this were simply the case of one all-nighter or two now and again, the repercussions wouldn't be quite as bad. However, sleep deprivation has been linked to weight gain, a greater risk of health problems, and lower productivity and efficiency, according to the Division of Sleep Medicine at Harvard Medical School. For children, lack of sleep can lead to lower cognitive function, an increase in emotional and behavioral problems, and poorer performance on standard ability tests. The amount of sleep children get even correlates to their academic performance two years later, according to the American Psychological Association.

It's a chicken-or-the-egg problem, of course: poorer Americans may be working more, have less access to childcare or assistance, and simply not have the time to sleep. However, research has shown that it's a downward spiral, with lack of sleep bringing about worse results, as well. If at all possible, families should be structuring bedtime routines and getting as much shut-eye as possible — which should help turn that spiral upwards, instead.