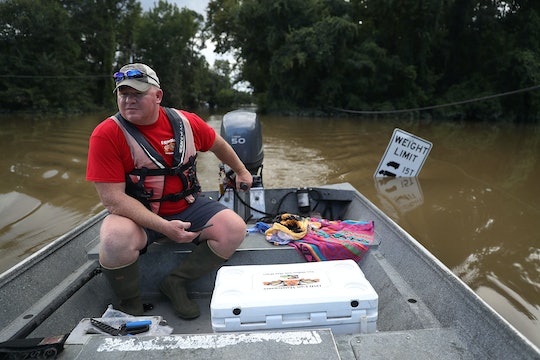 There's no doubt that it's a hard time to be living in Louisiana right now. Thanks to record-breaking rain that fell over the weekend, devastating floods have left thousands of people displaced, and an estimated 11 people dead, according to ABC News. As officials try to assess the damage — the flood waters are still rising in some parts of the state — it's starting to become clear that the situation is more dire than perhaps anyone first realized. As the numbers and figures roll in, stats on the Louisiana flood show why residents need more help than you think.

Louisiana Gov. John Bel Edwards spoke to reporters Tuesday about the flooding, calling the situation "unprecedented" and "historic," according ABC News. Edwards revealed than an estimated 40,000 homes had been damaged by the flood water — which rose quickly and essentially without warning — and that approximately 20,000 people had to be rescued from the rising water. Around 8,000 people were forced to stay in shelters as of Monday night, as they had to leave their homes and had nowhere else to go. The problem, experts have said, came down to the sheer amount of rainfall, and the short time in which it fell: some parts of the state received more than 25 inches of rain within only 48 hours. And that is an extremely uncommon occurrence, according to the National Weather Service, which said that rainfall like that is statistically expected "only once every 1,000 years."

According to CNN, 12 Louisiana parishes were declared to be disaster areas Tuesday, meaning that they will be eligible for assistance with ongoing rescue and recovery efforts, including deploying the Louisiana National Guard. It is expected that up to 30 parishes could be declared disaster areas as the disastrous effects of the flooding become more evident. But perhaps what is even more concerning is that, according to The Guardian, the threat of further flooding hasn't yet passed, with more severe storms expected throughout the week. As a result, Gov. Edwards warned residents Monday to remain highly cautious:

Even with the sunshine out today intermittently, the waters are going to continue to rise in many areas, so this is no time to let the guard down. This is a serious event. It is ongoing. It is not over.

Edwards isn't the only one worried. According to NBC News, Red Cross Vice President of Disaster Services Brad Kierserman said Tuesday that the flooding in Louisiana "is the worst natural disaster to strike the United States since Superstorm Sand" in 2012, adding that the relief effort could cost upwards of $30 million.

Those looking to donate to help those affected by the Louisiana flood can do so through the Red Cross (you can also call 1-800-REDCROSS, or text LAFLOODS to 90999 to donate $10), the Greater New Orleans Foundation, the United Way of Southeast Louisiana, the Second Harvest Food Bank of Greater New Orleans & Acadiana, or Volunteer Louisiana. Baton Rouge animal shelter the Companion Animal Alliance is also accepting donations to help provide foster homes for pets displaced by the floods.

But even when the floods do finally settle, the worst won't necessarily be over for those whose homes were damaged. According to CBS News, in Livingston Parish, which was hardest hit by the floods, an estimated 75 percent of homes are now completely unlivable. What's more is that only about 12 percent of homeowners in Baton Rouge and 14 percent of homeowners in Lafayette are thought to have flood insurance, since the area was not considered to be a high-risk flood zone. Without any idea when Louisiana residents will be able to return to their homes — or what they'll be able to do if they can't — it's clear that, despite the brutal conditions right now, it's really just the beginning of a very long recovery process for an awful lot of people.