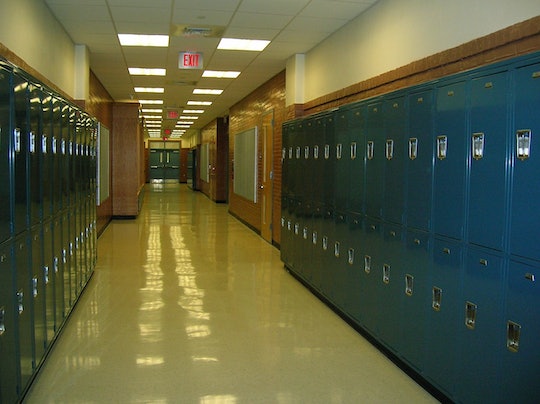 On Wednesday night, the Trump Administration announced that it was rolling back a policy letter issued by the Education and Justice Departments reaffirming the legal protection of transgender students. But the stats on transgender kids being bullied in school prove that they need more protection, not less. Title IX of the Education Amendments of 1972 prohibits discrimination on the basis of sex in any federally funded education program or activity, and it's the federal government's responsibility to uphold that law. To flout that obligation is a slap in the face to every American child.

But if Secretary of Education Betsy DeVos is truly "committed to investigating all claims of discrimination, bullying and harassment against those who are most vulnerable," as she claimed in her press statement regarding the new guidance, why would she characterize civil rights as "an issue best solved at the state and local level"? Prohibiting discrimination in schools is the very definition of her job. Currently, only 15 states and the District of Columbia have laws against gender identity discrimination in schools. The majority of transgender and gender nonconforming children are still in danger, and the head of the department charged with protecting them has now issued an edict officially announcing that the department won't (or can't as the result of pressure from the administration). Several publications have cited claims from anonymous sources that DeVos objected to the new guidance, although publicly, she has been supportive. Romper's request for comment was not immediately returned.

According to a 2015 survey by the Gay, Lesbian and Straight Education Network, transgender students experience "a more hostile school climate than all other students," including gay, lesbian, and bisexual students who identify as cisgender or genderqueer. A full 75.1 percent of transgender students reported feeling unsafe at school; 85.7 respondents reported hearing slurs about transgender people at school; and 40.5 said they heard them frequently or often. Reports of negative remarks about gender expression from both teachers and students have risen slightly since 2013.

Transgender students are far more likely to be harassed or assaulted based on gender or sexual orientation than cisgender or gender nonconforming students, in addition to gender identity-based harassment. 64.5 percent reported being verbally harassed about their gender expression, 24.9 percent say they were physically harassed, and 12 percent reported being physically assaulted.

The issue doesn't end with classmates, either; only 27 percent said that they found reporting harassment and assault to the faculty to be effective. And many schools have their own discriminatory policies: 50.9 percent of transgender students reported schools refusing to use their preferred name or pronoun, 60 percent were forced to use the wrong bathroom or locker room, and 28 percent weren't allowed to wear the clothing they felt comfortable in. As a result, 69.5 percent said that they avoid using the bathroom, 56.2 percent avoid locker rooms, and 43.8 percent skip gym class altogether.

The survey found that transgender students attending supportive schools, such as those with LGBTQ-inclusive curriculum and gay-straight alliance clubs, were less likely to experience hostility. It also found that students attending schools in the South, the Midwest, and small towns or rural areas were most likely to experience discrimination, harassment, and assault, and least likely to have access to LGBTQ resources and support. The majority of these areas have no local anti-discrimination laws of their own, and now that the Trump Administration has reportedly declined to enforce a part of Title IX, local schools have been emboldened to openly defy federal law and discriminate against innocent kids.