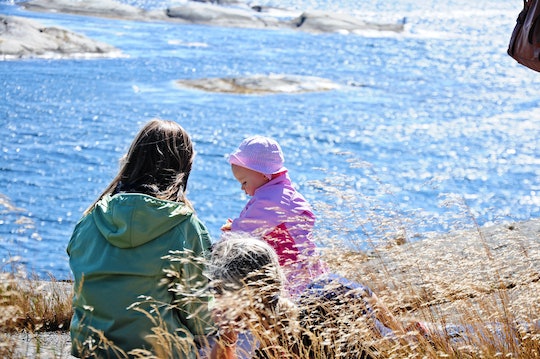 It doesn't take much for a Facebook post to become viral these days. In fact, it's so easy to click the "share" button and spread a post amongst hundreds of Facebook friends and then thousands of people around the world, it's almost surprising when things don't go viral. When one post echoes the sentiments of an entire group of passionate people, it's usually not long before the post reaches the entire Facebook community — but just because people share it doesn't mean it's universally agreed upon. Case in point: One stay-at-home mom's Facebook letter, which has seemingly drawn controversy for excluding the feelings and opinions of working moms.

The letter goes on to list various ways in which the fictional husband believes his wife does not work, including such things as "mak[ing] breakfast for the family" and "[taking the children] to school." The post continues to laundry-list reasons the wife "does not work", before finally explaining that, despite being a housewife, stay-at-home moms work very hard and that being a housewife is a full time job, despite its title.

As of press time, the article currently has over 531,000 likes or reactions, 190,690 shares and 324 comments. Talk about reaching people. Here's a snippet of the full text, in case you needed a better picture:

The letter has a very important message at the end.

I am a mother,

I am a daughter,

I am the master,

I am a manual worker,

I am the comforter,

I don't have a vacation,

I don't have a license for disease.

I don't have a day off

I work day and night,

I'm on duty all the time,

I do not receive salary and..

Even so, I often hear the phrase: "but what do you do all day?"

The post concludes with the phrase, "Dedicated to all the women who give their lives for the welfare of their families" — which, unsurprisingly, rubbed a few people the wrong way.

So who's not happy with the post? Turns out, it's working moms, who argued in the comments that they have to complete the same tasks as stay at home moms, but with fewer hours to accomplish their to-do lists.

One commenter, Gina Welker Palmateer echoed the sentiments of many working mothers . "[This is] also the daily routine of working women," Palmateer wrote. "They just have eight hours a day less to do it all." Palmateer's comment seemed to strike a chord with many working moms and those who sympathized with her, racking up some 3,445 likes in total (so far).

Those sentiments have been echoed elsewhere, as more mothers are forced to work from home, find expensive daycare, or risk taking unpaid parental leave. Not everyone, PBS Newshour's Corinne Segal pointed out this week, has the ability to stay home, and painting them as either unwilling to "give their lives for the welfare of their families" or selfish is a bit dangerous. In fact, an article in Fast Company earlier this year even pointed out that kids of working parents actually fare pretty well in the real world later on, despite the stigma. "Your mommy guilt might be misplaced," read the subheading.

While it is vitally important that we recognize the hard work of stay-at-home moms, it is also important to recognize the hard work of working moms, who do all the same work, but with less time in the day to cram everything in. Rather than assuming women who choose to work are being selfish, moms everywhere should be building one another up, no matter their career situation.