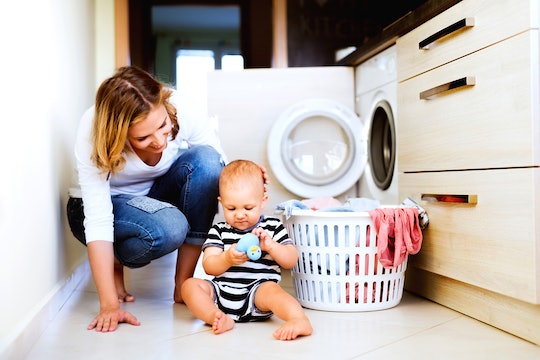 The life of a stay-at-home-parent is never as easy as most people think. From the moment they wake up to the moment they crawl back into bed at night, there's a million and one things to do and never enough time to do it all. Think of it as holding a dozen different positions and fitting them all into a 24-hour day — cook, therapist, nurse, chauffeur, personal shopper, party planner, teacher, and more. While it's hard to put a monetary value on parenthood, a recent study just did. Stay-at-home moms' salaries should be much higher than you might think, and this study proves it.

Salary.com gathered salary information on a handful of jobs that most stay-at-home parents do on a daily basis and tallied them up using the company's Salary Wizard tool to come up with an annual salary for a typical stay-at-home parent in 2018. The number came out to $162,581 annually based on a staggering 96-hour work week, according to People.

The company calls state-at-home parenting a hybrid job, meaning it's one job that encompasses many underneath its description, according to Salary.com.

So what jobs fall under the stay-at-home-mom (SAHM) umbrella? Janitor, tailor, photographer, bookkeeper, accountant, judge, and dietitian were just a few of the jobs considered part of SAHMs' daily duties, according to the study.

In 2017 (presumably before that year's numbers were available), D.C.'s local TV station WUSA 9, asked viewers what they thought about stay-at-home parents deserving (or flat-out earning) about $143,000 and the answers were varied.

"I am not a SAHM, but I know some that are worth every penny and more," one commentator wrote on the station's Facebook page. Another said, "It should be more than that, not only what we do but how much we spend on these kids!"

No matter what the feedback, it's safe to say that stay-at-home parents wear a lot of different — and very valuable — hats. You can figure out how much your annual stay-at-home parent salary should be by plugging your own responsibilities into the calculator, as Motherly noted, so if you don't do all of the things that Salary.com initially included (or if you do more that it didn't factor in).

Whether you are a stay-at-home parent or you know someone who is, Salary.com is on your side, advocating for all you do each and every day. And judging by their estimated annual salary, the work of a stay-at-home parent is only becoming more valuable as time passes. Many parents who stay home with their kids would argue that it's valuable regardless, but it's still important that everyone know just how significant of an effect these parents have. Here's to happy parenting that's at least rewarding emotionally, even if it's not monetarily.