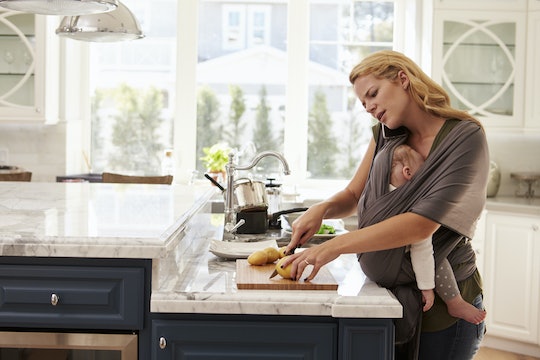 Being Forced To Stay At Home Is Actually Really Bad For A Mom's Mental Health, Science Says

Whether to return to work after having a baby or stay at home is one of the many decisions that come with new parenthood. But for some moms, it isn't a decision at all. Stay-at-home moms who are unhappy often aren't staying at home by choice, according to a recent study. Outside factors like child care prices and career problems as the result of taking time off for childbirth often pressure mothers into staying home with children.

The study, which was published in the Journal of Family and Economic Issues in June, was conducted by Dr. Suniya Luthar, Lucia Ciciolla, and Alex Curlee and evaluated more than 2,000 moms. The groups were divided into four groups based on two factors: whether they worked outside of their homes, and whether their status was what they desired, according to Luthar's article on the study, which was published in Psychology Today. They were then placed in categories of those whose desires aligned — those who worked when they wanted to work and those who stayed home when they wanted to stay home — and those who were misaligned — those who worked but would rather be at home and those who were at home but would rather work.

Perhaps unsurprisingly, those moms who were doing as they wished were reported to be the most psychologically healthy. Of those whose wishes and realities were misaligned, the women who were staying at home when they would rather be at work reported the lowest satisfaction levels. Additionally, these same women also reported more feelings of rejection toward their children.

Luthar wrote in her article about the study that misalignment finding is not entirely surprising. She described many of the women in the study as having higher education and professional skills that they wanted to use. Many of them also left their jobs when their kids came, perhaps adding to the feeling that they are being kept from what they want. One such mom that is described in the article has a graduate degree, but prioritized her husband's job over her own once they had children. She reportedly told Luthar, “Yup, that’s me: I’m that Stanford mom turned into soccer mom,” according to Psychology Today.

As for the main reason most moms stayed at home when they wanted to work, Luthar pointed to the high cost of child care. She also mentioned that people may be inclined to dismiss child care concerns that come from women with household incomes above the national average, but to that she said:

And in response to any such dismissiveness, I would say, the lack of quality child care is an issue that affects all parents in the U.S. Reliable, quality child care can be very difficult to acquire, and is often a major constraint in allowing both parents to hold down jobs.

The results of Luthar's study backed up her claim, as the most common response to why they weren't working was, "I can't get decent child care.”

Along with high child care costs, there are also professional restrictions that can pressure a mom into staying home. For one thing, the U.S. ranks at the very bottom of developed countries when it comes to paid family leave, according to Forbes. When new moms can't both take the necessary time off to care for a newborn and continue working, they can be pressured to leave their jobs entirely.

Assuming that women are able to swing child care and return to work after maternity leave, their careers are nonetheless negatively impacted simply because they became a mother. What is often referred to as the "motherhood penalty" describes the fact that mothers are less likely to be hired, are often perceived as being incompetent, and are paid less than their male counterparts with the same credentials, according to The New York Times. But fathers have almost the opposite experience, getting what is called the "fatherhood bonus." Considering the financial ramifications, it seems only logical for mom to stay home while dad progresses professionally, regardless of mom's wishes.

All of these factors can come together to pressure a mom into staying home when she would rather go back to work. Aside from attributing some of the misalignment to child care, Luthar doesn't go into many of the specific causes keeping moms in her study at home when they would rather not be. What she does clearly state is that when women are forced to skip out on chasing their professional dreams, their mental health suffers. In order to look out for these women, real changes must be made.

More Like This
Can You Help Your Baby’s Hair Grow?
Two Young Children Have Been Hospitalized Because Their Formula Is Out Of Stock
Spain Could Offer Up To 5 Days Of Menstrual Leave A Month & It'd Be A Game Changer
10 Lessons We’ve Learned From The Very Complicated Parents Of Grey’s Anatomy