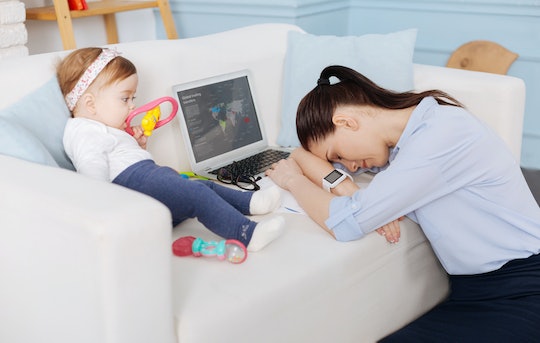 Staying At Home With Kids Is The Hardest Job A Person Can Have, Survey Says

With all due respect to rocket scientists and brain surgeons, their careers are a piece of cake when it compares to raising children. At least, that's what the results of a new survey suggest: staying at home with kids is the hardest job, the respondents said. Aveeno Baby asked 1,500 UK parents which was more difficult: staying home or working outside the home, and 31 percent agreed that escaping from your beloved children for nine hours a day is actually a pretty sweet deal.

"Becoming a parent is an amazing experience," Aveeno rep Rebecca Bennett told The Sun, "but we understand that entering this new chapter of life can also bring with it a great deal of stress and worry." She said that the survey was conducted in order for the company to figure out how best to support their customers, but I'm pretty sure they only make lotion, so unless they're offering to hire every parent who uses their products — and provide free childcare — I'm not quite sure how they plan on solving that problem. I should take a moment to mention that the old cliche about parenting being the most rewarding job, in addition to being the toughest, is indeed true in my experience, so if you're nine months pregnant and just handed in your resignation, please don't freak out.

In addition to being harder than a "real" job, 55 percent of survey respondents agreed that raising a baby is "hard work," while 20 percent found it "really difficult." As for the 45 percent of parents who don't think molding a brand new human life is challenging, I assume they all have amazing spouses who are not getting nearly enough credit for their work. There were some bright spots; only 40 percent agreed that after becoming a parent, "you will always be tired," which is a lot, sure, but think about the 60 percent who didn't! That means that parents have a better than average chance of actually being well rested at some point in the future. Probably when the kid grows up and moves out.

This falls in line with another parenting survey conducted by Welch's last year, in which the company profiled the day to day lives of 2,000 moms with kids between ages 5 and 12. That research showed that the average stay at home mother works 98 hours a week, according to Yahoo, or the equivalent of two and a half full time jobs.

Another survey, conducted by The Bump and Forbes, revealed that the stay at home/work outside the home quandary might not be solved as easily as one would think; it looks like it's really more of a "grass is always greener" situation. According to those results, 34 percent of working moms wish they could stay at home instead, and 47 would prefer not to work at all. Most are doing it out of necessity, however, and 48 percent agreed that staying at home is a privilege that many families can't afford. Still, 43 percent said they've been judged for not spending enough time with the kids they're working to provide for.

If you think the results from a skin care company, a juice company, and a parenting website might be a little unscientific, I've got backup: the Pew Research Center also has some pretty eye-opening statistics. In 2015, 70 percent of moms worked outside the home, and 43 percent said that they didn't get to spend enough time with their kids. But these results also has provide a ray of hope: almost 90 percent of all moms said that motherhood is "both rewarding and enjoyable at least most of the time." The bottom line is that no matter how you do it, you're going to feel bad, but you'll also probably love it.

More Like This
What Is RSV?
Experts Explain Whether It’s Safe For Your Baby To Sleep On Your Chest
What Parents Need To Know After DEA Issues Warning About "Rainbow Fentanyl"
How To Get Boogers Out Of A Baby's Nose