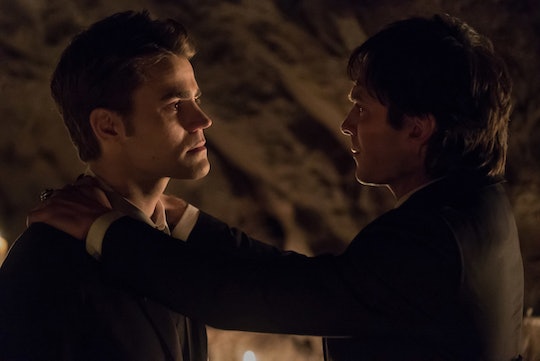 We knew it was coming. We knew that someone would die in The Vampire Diaries series finale, and yet that didn't make the revelation any less heartbreaking to endure. In fact, even though I saw it happen firsthand, it's still difficult to comprehend. Stefan died on The Vampire Diaries and even if you predicted things playing out this way, I have a feeling you are still knee-deep in a sob fest right about now.

I had a feeling that Stefan would be the one to go out of the whole group. It just felt like, in a way, he was always destined to save everyone and rectify all the wrongs that had been haunting him throughout his entire life as a vampire/ripper. He's always talked about wanting to make things right, and allowing his brother the chance to live a long, happy life with the love of his life, felt like the perfect way to do just that.

I was, of course, sobbing my eyes out the entire time nonetheless. Because even though I've always been more prone to loving Damon over Stefan, he was a great guy and an amazing character. I may not have wanted him to end up with Elena (sorry Stelena 'shippers), but I did want him to be happy. But, in a way, I think this did make him happy — making it so that his loved ones could be happy. That's just the kind of guy he was.

And as a nice parting touch, he made sure to inject his blood into Damon right before he died, thereby ensuring his brother would have the cure and be human again. (Fitting since Stefan was the one who made Damon become a vampire in the first place.)

But because this is TVD we're talking about here, fans didn't just see Stefan sacrifice himself for his brother — we also got to see him reunite with his best friend, Lexi, in the after life (or whatever now exists once you die on this show). After filling a still-sleeping Elena in on what happened, he stepped out into the sunlight and there she was — ready to go on a new adventure with her best pal. So you can probably imagine what this did to my emotions.

In a way, it was a really great message to send to fans. Yes, he may be dead, but he was also in a good place and wasn't alone. I will forever miss Stefan. That will never change. But the way that he was honored felt very fitting for his memory and for the character we've come to love throughout all these years.