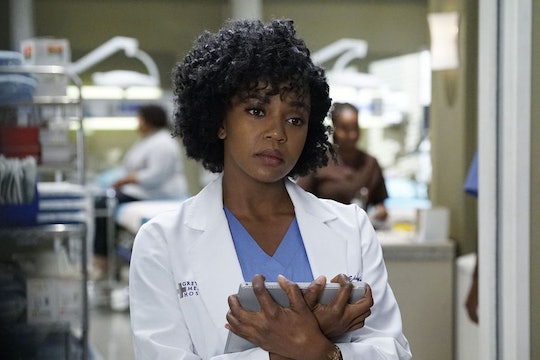 After another tremor developed in his left hand, Stephanie went with Kyle to the hospital, even though it was her day off, so that he could get it checked out. Just as Steph suspected, he had the same problem he had before but on the other side of the braid. As Amelia and DeLuca went to work looking at the problem, Steph hovered. She kept asking questions, taking over for DeLuca, suggesting alternative treatments, and even speaking for Kyle for Amelia asked him if he wanted to do the surgery that day or wait.

Steph was basically a backseat driver, acting like she was a doctor when really, because she was Kyle's girlfriend, she was only supposed to be a loved one. Amelia finally had to put a stop to it when Steph said she wanted to be in the Operating Room with Kyle while he underwent surgery. Steph tried to argue by saying she wouldn't be operating she'd just hold his hand like last time. Still Amelia said no. Steph then tried to convince Amelia to let her sit in the gallery, and Amelia still said no. Finally Amelia told Steph about all the ways she was being a "helicopter loved one" and that Amelia couldn't have that while she was operating on Kyle's brain. Truthfully, that's a very valid reason.

Amelia then took Steph's access key and Steph was told to sit in the waiting room. Although Kyle's surgery went well, it was then that Steph decided to end it with him. When talking to Jo about it Steph explained that she used to be that kid that was in and out of the hospital and she can't just sit by and watch as Kyle goes through the same thing. Steph wants to be a doctor, in the operating room, helping to heal people not sitting by while others do the healing.

Therefore, in a heartbreaking moment, Steph walked away from Kyle and put on her scrubs, becoming the doctor she's always wanted to me. Although it was devastating to watch Steph and Kyle break-up so soon after they got together, it also wasn't that surprising. Steph has always put her career above everything else and it's clear medicine will always be her first love.