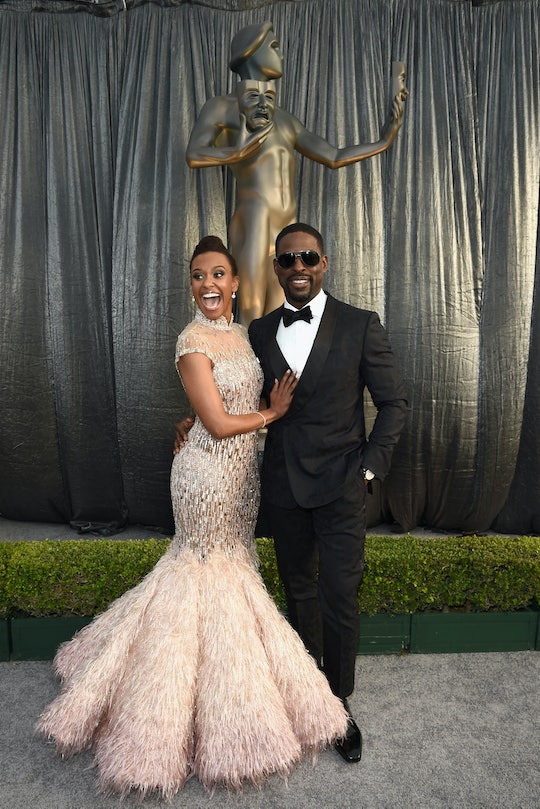 He's a newly-minted SAG Award winner, the first African-American man to win a Golden Globe for a TV drama, and the only black man to score an Emmy as a lead actor since the 1990s. Pretty impressive, right? But Sterling K. Brown's wife jokes their kids don't care what they do for a living if they're not on the Disney Channel, which is so relatable for parents of perpetually unimpressed kids.

Before his moving acceptance speech in the middle of the awards show, however, People reported that Brown and actress wife Ryan Michelle Bathe — parents to Andrew, 6, and Amaré, 2 — told E! Live on the red carpet that not only are their kids not impressed with Brown's fame (or clearly for that matter, his ability to make viewers cry just by looking at the camera), but they think the hoopla is a pain in the you-know-what.

If that isn't funny enough, People added Andrew was sure his dad couldn't possibly get another award. "No you don’t, you already have the Golden Globe,’" Bathe explained of her son's reaction to his parents heading out over the weekend for a date night at the SAGs.

"Your kids keep you grounded, right?" Bathe added, according to Parents, noting that what would impress her boys would be for her much-honored husband, co-star of such big-screen movies as Black Panther, to actually take a step, well, sideways in his career — to the Disney Channel.

"Maybe Austin & Ally, or Bunk’d — he loves Bunk’d," Bathe chimed in, referring to two of Disney's classics that constantly play at my home, too. "Now if we were on Bunk’d, then he would be like, 'Y’all are really doing something!'"

This isn't the first time that Brown (or Bathe) has noted that his boys really aren't into the whole fame thing.

"Anything that takes me away from my kids, they're like 'Later!' for it," the Marshall actor told Today. "My son will say sometimes, 'I wish you weren't so famous, Daddy.' I say, 'Why?' 'Because I just want you to be at home more.'" Aww.

Clearly, this adorable and talented dad is on a roll, in both his work and his life. Film website IMDB.com shows he has a lot of movies coming up, and I can't wait to catch them.

For the moment, though, he'd better step it up to get a little more praise at home. (Or, maybe, take fewer jobs away from home?)

Brown joked that their boys would probably spend the night watching their favorite shows on Disney Junior rather than watching dear old Dad potentially accept his award, People reported. Geez, a little respect for the award winner would be nice, but I guess just being "Dad" will have to do.