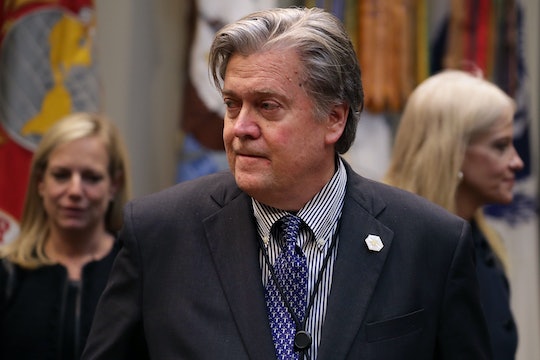 Former Breitbart News executive chairman Steve Bannon's political career has advanced in leaps and bounds ever since President Donald Trump first showed up on the scene as an unexpected presidential contender. Within a year, Bannon went from heading up a right-wing media website to sitting on the National Security Council, leading Time to ask, "Is Steve Bannon the second most powerful man in the world?" He may not be (yet), but as Trump's chief strategist, his views will affect Americans across the country. With that in mind, women are understandably concerned about Bannon's quotes on birth control, abortion, and reproductive rights in general.

One of the most most famous birth control quotes attributed to Bannon wasn't actually said (or written) by Bannon at all, however. An article published on Breitbart entitled "Birth Control Makes Women Unattractive and Crazy" — yes, very charming — was actually written by Milo Yiannopoulos, a Breitbart writer who has been labeled a white nationalist and "the most notorious spokesman for the alt-right," according to Bloomberg.

According to Media Matters, Breitbart has also spread misinformation about birth control, linking traces of contraceptives found in drinking water to the "infertility epidemic in the U.S. and in other western countries." The original study cited by Breitbart writer Austin Ruse found that traces of hormones could affect a single species of fish in Japan, but in his article, Ruse appeared to link the traces of contraceptives to infertility in humans as well, writing:

If it can be shown that contraceptives in drinking water is causing infertility among those who want to have babies, a legal revolution against the pill could occur.

Bannon hasn't said much himself about birth control, but he's made his feelings about family dynamics very clear. According to The Independent, he once said in an interview:

That’s one of the unintended consequences of the women’s liberation movement – that, in fact, the women that would lead this country would be feminine, they would be pro-family, they would have husbands, they would love their children. They wouldn't be a bunch of dykes.

So while Bannon hasn't been too vocal of his own views, he's definitely supported and spread the views of many anti-choice writers with negative views on birth control, reproductive rights, and family planning. What those views will mean now that he's in the White House remains to be seen, but there are plenty of women and pro-choice advocates who aren't exactly optimistic about his new role in government and what it means for women's reproductive rights.