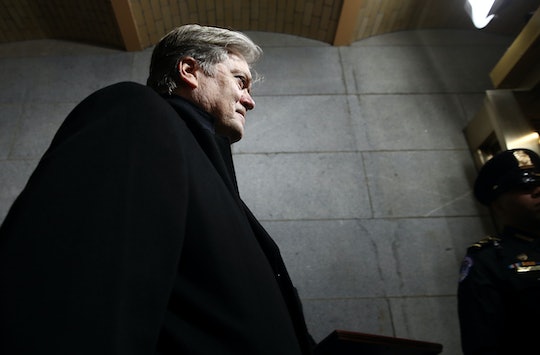 On Saturday, Steve Bannon, a chief strategist and senior counsel of President Trump's, was given a role on the “principals committee” of the National Security Council through executive order. Before his new political role, he worked as executive chair of Breitbart News, a far-right news and opinion website, which Bannon himself has said is the platform of the "alt-Right." Since Bannon's name has been in the news so much, you've probably heard at least a little bit about him, but his views on Muslim individuals and Islam are especially problematic. Here, we've compiled some quotes from Breitbart and Steve Bannon that will help voters understand his positions.

Breitbart News Network is a far-right American news and opinion website founded by conservative commentator Andrew Breitbart. As executive chair, and a founding member of the board behind Breitbart, Bannon's leadership took the outlet in a more alt-right and nationalistic direction. And though Bannon took a leave of absence from Breitbart in order to work for the campaign, and announced that he would resign from Breitbart, his work there is still relevant to his work with the Trump Administration. And a lot of what he's said or allowed to be published through Breitbart should make people worried about the sort of influence he has in his new positions. Because anyone who's said something like, "Do you think that Muslims that are Sharia adherent can actually be part of a society, integrate into a society where you have the rule of law..." should get some serious eyebrow-raises in response.

Bannon has said plenty of things in regards to Islam that should worry anyone who cares about religious freedom and human rights. For example, at a presentation to a Vatican conference a couple of years ago, here are just a couple samples of things he said:

Now that call converges with something we have to face, and it’s a very unpleasant topic, but we are in an outright war against jihadist Islamic fascism.

...we’re now, I believe, at the beginning stages of a global war against Islamic fascism.

If you look back at the long history of the Judeo-Christian West struggle against Islam, I believe that our forefathers kept their stance, and I think they did the right thing. I think they kept it out of the world, whether it was at Vienna, or Tours, or other places… It bequeathed to use the great institution that is the church of the West.

Again, that was all at one conference. What else has Bannon said, or written about through Breitbart, about Islam?

This tweet, referencing his words in the piece quoted above, makes a chilling point. "In this piece [link] … Bannon calls Islam threat to West. In this one, he predicts WW3 [link]."

In the second article referenced in that tweet, the writer states that, during an interview with Bannon, he conveyed that, "he expected a new and even bigger war as part of the current crisis, and he did not seem at all fazed by the prospect." This coming from the same guy who seems convinced that we are facing a "global war against Islamic fascism." He seems pretty convinced we are going to war, and pretty sure of who he thinks the enemy will be in that war.

What about statements published on Breitbart while Bannon was overseeing the site? One headline read, "Political Correctness Protects Muslim Rape Culture," as the Southern Poverty Law Center pointed out in this tweet:

Bannon has also endorsed Paul Nehlen, a past primary challenger to House Speaker Paul Ryan, who during his primary challenge suggested deporting all Muslims from the United States. He's also praised Pamela Geller, a woman he billed as, "one of the top word experts in radical Islam and Shariah law and Islamic supremacism," who has said things like, "The Department of Justice has become a de-facto legal arm for Muslim Brotherhood groups. I mean, they are suing towns, they are suing schools, they are suing prisons, really to impose the Shariah," according to Mother Jones.

Bannon has consistently had guests on for radio interviews with Breitbart who have disparaged Islam, has allowed islamaphobic headlines and articles to be published on his website, and has directly stated anti-Islamic sentiments himself in the past.

And now he's in the White House. He's been given a security role that gives him, "status alongside the secretaries of state and defense, and over the president’s top military and intelligence advisers," though he is a political advisor without the sort of experience usually demanded on the job. Bannon is "a former Navy surface warfare officer, admiral’s aide, investment banker, Hollywood producer and Breitbart News firebrand." In contrast, according to the Washington Post, he essentially replaced the "highest-ranking military officer in the United States, the chairman of the Joint Chiefs of Staff, and the highest-ranking intelligence officer in the United States, the director of national intelligence."

In previous administrations, those positions or their equivalent (before the creation of the director of national intelligence, the CIA director occupied that role) held permanent positions on the NSC.

The individuals in those roles will only be invited when their "specific expertise is seen to be required." Bannon, on the other hand, has been made a permanent member of the NSC, even though "his national security experience consists of a graduate degree and seven years in the Navy."

Whatever Bannon does in the job, we need to remember the things he's said in the past; they will be relevant when decisions like Trump's controversial immigration ban are revealed and legislated.