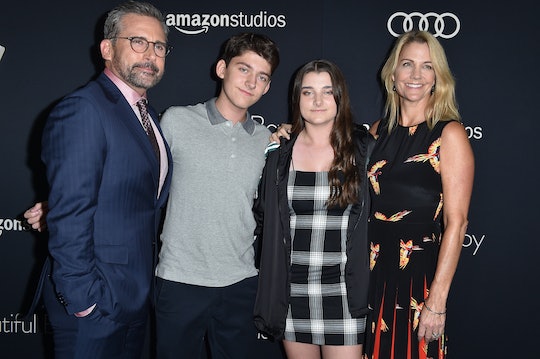 Steve Carell Admits He Has A Favorite Child & Face It, So Do You

The Office's Michael Scott definitely had a favorite employee (hello, temp Ryan Howard), so perhaps we shouldn't be surprised that father-of-two Steve Carell admitted he has a favorite kid, too.

Daytime talk show host Ellen DeGeneres put 57-year-old Carell in the hot seat during her show, The Ellen DeGeneres Show, for a round of "Burning Questions" that had the actor sharing more than he may have liked. "Do you have a favorite child?" Ellen asked at one point in the game.

"Yes," Carell quickly replied before breaking out into laughter. Thankfully, DeGeneres didn't ask him to expand any further upon his answer.

Carell has two children — 18-year-old Elisabeth and 15-year-old John — with wife Nancy Carell (who played Carol Stills on The Office, Michael Scott's relator-turned-girlfriend), whom he married in 1995, according to Country Living.

And while some parents will certainly condemn Carell for admitting to having a favorite child, at least one study finds he's not all that different from other parents. A 2005 study published in The Journal of Family Psychology saw sociologist Katherine Conger follow 384 families with siblings born within four years of each other to determine if parents ever displayed preferential treatment to one sibling. What Conger found was that 74% of mothers and 70% percent of fathers reported giving one child preferential treatment over the other.

But while having a favorite child may be more normal than we think, many parents may still feel guilty for favoring one of their brood over the others. Still, Psychology Today has assured caregivers that playing favorites isn't about loving one child more. Instead, the magazine reported that, more often than not, parents develop a favorite child as a result of how their own personality "resonates" with those of their children. Meaning Carell's favorite child may just be the one he gets along with or relates to more.

Along with admitting to having a favorite, Carell was also quick to admit to DeGeneres that he's done things to embarrass his children in the past. "What is something you do that embarrasses your kids?" DeGeneres asked during the pair's game of "Burning Questions."

While chatting with DeGeneres earlier in the show, Carell had admitted to regularly pranking his kids by seeing them off to school while wearing a dog head mask and a bathrobe. "I usually am holding some sort of household appliance," Carell explained. "My wife will get in the car and she'll drive out to the street so I'll run out to the street just as the car is passing by in front of our house and I'll have the dog mask on and usually like pajamas or a robe holding a blender and just [waving]."

While many parents will relate to having a favorite child, it's hard to know if Carell, a notorious jokester, was being completely honest. The comedic actor admitted to telling at least a few fibs while playing "Burning Questions" with DeGeneres. "Is this called 'Burning Lies?'" Carell jokingly asked during the game.