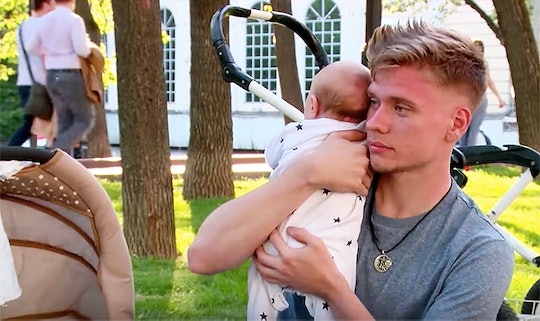 90 Day Fiancé star Steven has a lot to learn about parenthood. Case in point: Just days before the birth of Steven's son on 90 Day Fiancé, the dad-to-be expressed confusion about how much it costs to raise an "entire baby." Yep. Considering babies typically don't come in half sizes, it's no wonder why fans have a lot of feelings about Steven's naiveté.

Sunday's episode of 90 Day Fiancé is titled "Rough Landings," an apt description given Steven's reaction to his impending fatherhood. Just hours after landing in Russia, where his pregnant fiancée, Olga, lives, he exposes his lack of knowledge about babies.

The awkward moment goes down shortly after Steven presents Olga with some baby gifts he brought with him from America. The parenting goodies include a cover-up for breastfeeding, a Boppy pillow, and one other item that I can't quite recall.

After mumbling something about how the Boppy will allow the baby to sit up if he doesn't want to lie down (*eyes roll out of head*), Steven reveals in a talking head that he doesn't know how much it costs to raise an "entire baby." Well, you got to give the guy props for honesty, I suppose.

Shortly after Steven informed viewers that babies supposedly come in parts, fans took to Twitter to comment on his interesting choice of words.

"'I have no idea how much it costs to raise an entire baby,'" someone quipped. "Steven is an entire child. #90DayFiance."

Another fan joked: “'I don’t know how much it costs to raise an entire baby.' I suggest asking about getting a discount on half a baby. #90DayFiance."

"Steven: I don’t know how to raise an entire baby.

Me: Well I know half a baby is expensive so...an entire babys gotta be like... a whole bunch of money. #90DayFiance."

Others pointed out that Steven is in for a big surprise, as it costs a lot to raise kids... obviously.

"Steven said 'I don’t know how much a cost to raise an entire baby.' Someone tell him there is no number," someone who is likely a parent wrote.

Someone else said: "Steven doesn't know how much it costs to raise an entire baby. Boy is he in for a surprise.#90DayFiance."

"Steven’s gonna get an education in how crazy expensive babies are," one fan wrote.

The good news for Steven? The exchange rate between Russia and America is pretty forgiving. After a day of shopping for their "entire baby," Olga and Steven paid 1,000 rubles for their baby supplies. If you're not well-versed in Russian currency, that roughly translates to $15 in American dollars. Dang.

"Don't worry steven 1,000 Rubles is about $15 you got a bargain," someone commented about the affordable exchange rate.

Of course, fans want the best for Steven and Olga as they navigate their new life as parents. Raising a kid is no easy feat, especially when you're doing it in a new country like Steven is, and there's a good chance he'll get the hang of this parenting thing as he goes along. Fingers crossed.