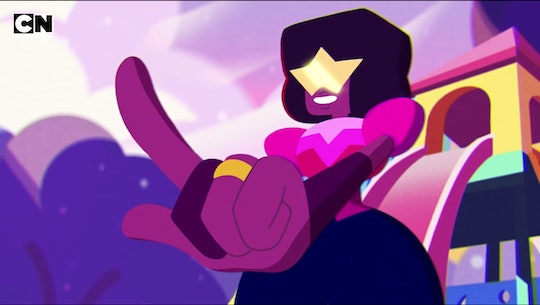 The first of four Steven Universe anti-racism PSAs rolled out Tuesday and features a behind-the-scenes look at Garnet filming, get this, a PSA. Titled, "Don't Deny It, Defy It," the PSA opens with two boys — one Black and one white — holding hands and playing together. In a nod to the LGBTQ+ representation and visibility of Steven Universe, the boys suggest they get married when they're older.

When a third boy physically breaks the couple apart and tells them "Black people can't marry white people," Garnet steps in to caution the third boy against being racist.

It's then, however, that a director yells "cut" and viewers realize they were watching a PSA inside a PSA. The actual PSA continues with one of the PSA's child actors claiming racist confrontations like the one featured in the PSA don't actually happen "in real life."

"Just because this has never happened to you, doesn't mean it doesn't happen," Garnet says.

"You've got to realize it hurts to deal with racism," one of the child actors says. "And when people act like it's not real, it makes it feel even worse."

"You have to acknowledge racism to work against it," Garnet adds.

"Don't Deny It — Defy It!" is the first of four PSAs, that Entertainment Weekly has reported will roll out every two months.

In promoting the Steven Universe anti-racism PSA on its website, Cartoon Network noted it "stands behind anti-racism as part of our commitment to fostering inclusion and equity." Along with the PSA, the former home of Steven Universe also shared links to the National Black Justice Coalition, the National Bail Out Collective, and the NAACP Legal Defense and Educational Fund.

So although it's a bummer there are no plans to fully revive Steven Universe, an LGBTQ+ inclusive anti-racism PSA for kids may be gift enough.