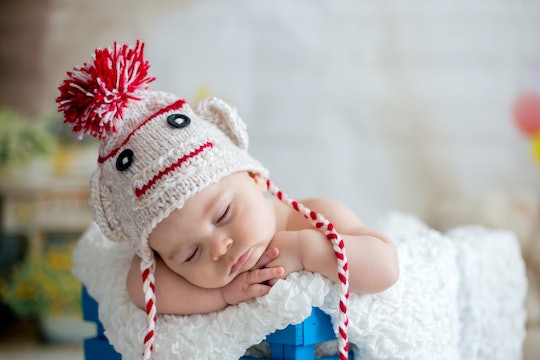 When you're stuck at home during a winter storm, things can get pretty boring... that is, unless you have a bae to keep you company. You know what I mean? (Yes, you know what I mean.) There are often whispers about potential storm babies when a big storm hits — I mean, we all have to take heed when weather anchors are out in a blizzard yelling in their North Face jackets for us to stay inside — with the implication that winter weather sends people inside where they quickly burn through their collection of board games and progress to... Twister. And in fact, the urban legends are correct. Nine to 10 months after a huge storm, there tends to be a boom in births — behold, storm babies! In order to determine if baby booms following storms are really that significant or just a coincidence, Treetopia decided to gather data surrounding 10 significant storms. And based on the 10 storms analyzed, it's safe to say that storms do sometimes cause baby booms.

So if this week's bomb cyclone provides you with the right conditions — freezing temperatures outside, hampered transit systems that scream "just stay in," and a pantry full of storm snacks — to make a baby, just know that the hospital may be a little crowded when you give birth nine to 10 months from now.

Already lived through a superstorm? We can tell from the age of your kid whether or not they are a storm baby using Treetopia's data from 10 snowstorms that saw significant increases in the birth rate. In a word: busted!

The cause: Superstorm Sandy

Hurricane Sandy made its devastating impact on New York and New Jersey on October 29, 2012, but began wreaking havoc on the Carribbean on October 22. It resulted in a 20 to 25 percent increase in births in New Jersey hospitals in July 2013, according to CNN. As residents hunkered down without power in many places and made do with whatever they had in the cupboards (supermarket shelves had been picked dry), they evidently made the best of their time stuck at home.

The notoriously snowy Buffalo, New York, was even snowier in November of 2014 — and even baby-er in August 2015. Mercy Hospital in Buffalo reported a 25 to 30 percent increase in births nine months after the storm, according to the New York Post. The baby boom was so significant that additional staff and cribs had to be brought to the hospital.

The cause: The January 2010 storm in Britain

In January 2010, a record winter snowfall sparked a romp that resulted in a 6 percent year over year increase in births, according to the the Daily Mail. England and Wales had 64,542 births in October 2010, and 62,986 births in September 2010. This was the highest birth rate seen in Britain in 20 years.

October 2007 Babies In The Mountain States

The cause: The December 2006 blizzards in Colorado

Colorado-dwellers love to ski — but 2006 brought a little too much snow for the slopes, sending residents indoors with back-to-back blizzards. In October 2007, there was a 3 percent to 6.7 percent jump in births, compared to the preceding and following Octobers. It was the highest birth rate for that month in Colorado of any other year between 1995 and 2015.

The cause: The January 1996 nor'easter

In January 1996, all of New England as well as New York, New Jersey, Pennsylvania, Maryland, and Virginia were hit with a harsh nor'easter. But in October 1996, the same areas were hit with an influx of cute babies. The highest number of October births in Pennsylvania, Massachusetts, Connecticut, and New York compared to any other years were reported in 1996. There were also 1.5 percent to 6.4 percent increases in birth rates from October 1995 to October 1996 across all the aforementioned states. That's a whole lot of babies! In fact, if you're on the super-young end of things, you could be a nor'easter baby.

October/November 2006 Babies In The Mid-Atlantic

The cause: The January 2000 North American blizzard

Virginia and North Carolina were hit hard in January 2006, with thousands of power outages affecting the area. The storm eventually caused a 2.3 percent to 6.7 percent bump in birth count. Approximately 700-800 more births were recorded in North Carolina in October and November than in the preceding and following Octobers and Novembers. Snow is a little more rare down south, so you can't blame North Carolina residents for wanting to avoid it!

November/December 2007 Babies In The Midwest

The cause: The February 2007 snowstorm in Minnesota and Wisconsin

A baby boom wasn't the only benefit of this storm — according to the Minnesota State Climatology Office, the February 2007 storm delivered the moisture central Minnesota desperately needed. The snowstorm eventually caused a 0.5 percent to 5.6 percent spike in births in the area, with several hundred more births in November and December 2007 than in other years.

The cause: The Presidents' Day Storm II of 2003

This storm affected Massachusetts, New York, Missouri, Illinois, Pennsylvania, Maryland, and Northern Virginia, with all seven states experiencing jumps in birth. Birth rates jumped in November and December 2003 by 2.2 percent to 3.1 percent compared to the same months in the previous year.

December 1995 Babies In The Northeast

The cause: The February 1995 Nor'easter

The 1995 Nor’easter caused a 1.9 percent to 2.8 percent baby boom in New England, New Jersey, New York, and Pennsylvania for the month of December 1995. Not to mention, January 1997 had 1.9 percent more births than January 1998 across all of those areas. Plus, New York experienced the highest number of births of any year for the same month, with December 1995 raking in a 2.8 percent higher birth rate than December 1996.

July 1997 Babies In The Prairie

The cause: The October 1997 Western plains winter storms

In October 1997, a storm roared through Colorado, Nebraska, Illinois, Michigan, Iowa, Oklahoma, and Kansas. The storm sent people inside, resulting in a year over year 0.5 percent to 1.5 percent increase in births in July 1997. Not to mention, Michigan experienced the highest birth rate in July compared to the same month in all other years.

It's important to note that storms can be destructive and scary, and can put lives and communities at risk. One bright side of the need to stay stay in your homes is that people often retreat under the covers, which sometimes results in a small boom of adorable babies nine to 10 months later. Stay warm, everyone!