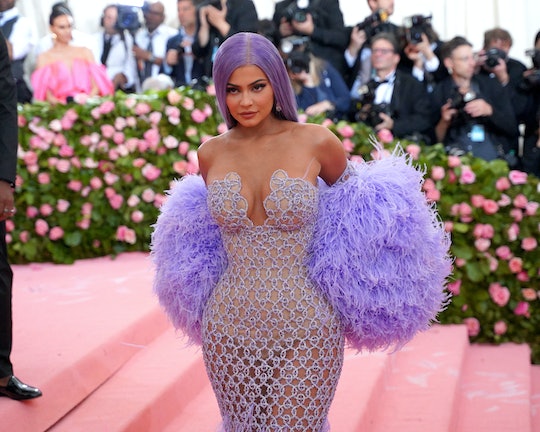 If you were looking for something to start your work week with a smile, boy do I have some good news for you, my friends. Halloween is the perfect time for over-the-top baby costumes and Kylie Jenner did not disappoint. Indeed, her daughter Stormi Webster's Halloween costume was the absolute spitting image of Jenner's now-iconic Meta Gala look and I can't get over just how detailed this 1-year-old costume's turned out to be.

On Sunday, Jenner posted three sweet photos of Stormi all dolled up in a feather and sequins lavender gown, just like mommy's. She captioned the post, "My baby!! I can't handle this!" along with three purple heart emojis. And while Stormi doesn't seem to realize how adorable she looks, Jenner's followers were quick to let her know. Even Sofia Richie, Scott Disick's girlfriend, praised the ensemble saying, "Omg I can’t deal."

Back in May, according to USA Today, Jenner attended the Met Gala in a custom Versace gown in the same shade of purple as Stormi's, dripping with glamour and topped off with a purple wig. The event's theme this year was "Camp: Notes on Fashion," in reference to the 1964 essay "Notes on Camp," by Susan Sontag, according to People. The essay described camp as "love of the unnatural: of artifice and exaggeration,” hence the extravagant look that she and Stormi donned. And in her recreation of the getup, Jenner even included the feathers and wig.

Jenner attended the Met Gala with her sisters Kendall Jenner and Kim Kardashian West, along with Kris Jenner and Kanye West. Travis Scott, father to Stormi, also joined the KarJenner gang at the event, according to ELLE. Jenner and Scott have been taking a break from their two-year relationship according to sources, but seem to be on good terms. ”They’re still figuring things out but are spending time together,” a source told People.

Scott isn't present in the photos of Stormi in her Halloween costume, but I have no doubt it received his stamp of approval. This isn't the first time that the little girl's parents have gone all out for a holiday. Back in February, the pair threw her a first birthday party fit for My Super Sweet Sixteen. The massive party, which followed a smaller, more laid back rainbow-themed party for family and close friends, was basically an entire theme park set up for a one-year-old and her tiny friends.

The party, appropriately named Stormi World, was modeled after Scott's hit album Astroworld and featured everything from theme park rides and moving cakes to a live "Baby Shark" performance and Chanel party favors, according to Harper's Bazaar. Even Jenner admitted that she went above and beyond for the special day, writing "i had to go all out for my baby," on Instagram. Going all out seems to be Jenner's style.

For Halloween last year, Jenner went through not one, not two, but five costumes, as Cosmopolitan reported. Only two featured Stormi, but they did not disappoint. The first was a mother-daughter duo costume of "Stormi Weather," with Jenner as a raincloud and Stormi as the lightning bolt. The other costume that the two wore together was pair of beautiful butterflies. Jenner also donned an angel costume with her sisters, a Fanta soda girl with her friends, and a Barbie costume.

There are sill a few more days until Halloween, so be on the lookout for more looks from Jenner and her little bundle. So far, the photos are sweeter than the bags of Halloween candy that I may or may not have already eaten.