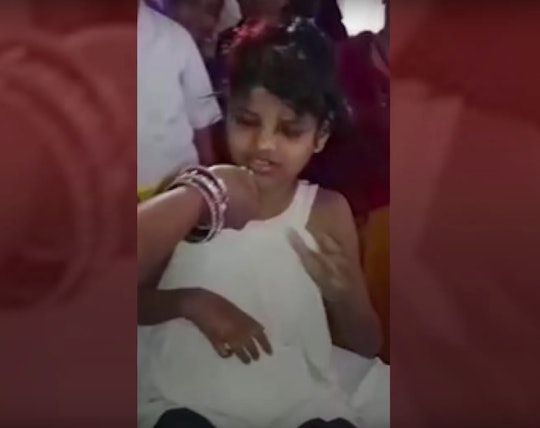 Viral Story Of Girl Raised By Monkeys May Not Be True

It was fantastical, exotic, the stuff of legends and myth: Last week, news outlets around the world reported that Indian authorities had recently rescued a girl who had been living in a forest, among the monkeys, possibly since birth. But now, indicators like her rapid improvements and facts about the area where she was discovered suggest that the story of the as of yet-unidentified Indian girl raised by monkeys is not true. Regardless, the tragic reality of what may have really happened to her is far, far from a page out of The Jungle Book.

Drawing on reports from the Associated Press and the New Indian Express, The Washington Post weaved a tale of the girl's captivating return to the realm of humans from a forest of Uttar Pradesh, a northern state in India: The narrative centered on "a naked human girl, playing with the primates as if she were one of them." In this version of the story, the monkeys formed a protective barrier around the girl when police attempted to reach her in January. When she arrived at a hospital, doctors found that she could not speak, preferred to move around on her arms and legs like a monkey, and to eat food directly off the floor with her mouth. (The newspaper added a lengthy editor's note amending the original piece and ran another story when new details came to light.)

The part about the girl's difficulty communicating and her strange behaviors turned out to be true; the rest, not so much. In fact, the real story of how she came to be in the forest remains elusive and opaque, but the working hypotheses of medical personnel and other officials paint a much more nefarious, heartbreaking picture than the one of a girl happily living among a family of monkeys.

While her true age is still unclear, The Guardian reported that her inability to speak is a likely a product of disabilities, not a lifetime spent around primates. And, district chief forestry officer JP Singh believes that her caretakers used that fact to their advantage when they decided to simply get rid of her, as he told the newspaper:

I think the family members of this girl had been aware that she is not able to speak, and they may have abandoned her near the forest road. If she was living with monkeys it would have been for a few days only, not for a long time. It is clear from first time view, if you see the girl, that she is only eight or nine years old, but her facial expressions show that she is disabled, not only mentally but also physically.

The Guardian reported that the girl's condition and behaviors have improved rapidly in the approximately two months she has been hospitalized. In the beginning, she crawled; Now, she can walk upright, for example. This indicates that she was raised by humans. What's more, the Hindustan Times reported that the head constable who initially rescued the girl from the wildlife reserve where she was found, said there were no monkeys around during the process. Also, she never could have lived in the forest for year undetected, as hundreds of cameras are installed there for security and animal census purposes. Finally, the truth is that she was discovered on a roadside, not deep in the forest.

The girl's is a story that morphed from a storybook-like tale to one of cruelty on the part of whoever was supposed to be taking care of her. But what's most important is that the abandoned girl has been rescued and can continue her recovery, no matter what her tragic backstory might be.