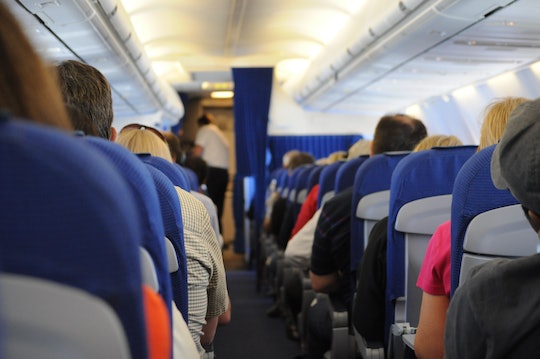 Stranger Soothes Baby On Plane, Reminds Us All That Goodness Is Still Out There

This man’s sweet gesture has spread goosebumps all over social media while reminding us that goodness is still out there. It happened earlier this week when a mom, who is also pregnant, was traveling with her 20-month-old son as the toddler began to grow restless and fussy on the flight. Moments later the man, who was sitting next to them, offered to help and soothed the baby on the plane, carrying the little boy up and down the aisle until he fell asleep. A fellow passenger snapped a photo of the touching moment and posted it on Facebook, where it’s gone viral and has been shared more than 100,000 times since Sept. 5.

The mom, Monica Nelson, spoke with TODAY on Friday and said she had been nervous about flying alone with her son, Luke. These understandable nerves were later confirmed when her toddler wouldn’t rest and, as any parent knows, traveling with a child is hardly a predictable or simple task. And that’s why the stranger on the flight, who Nelson named as Reid, swooped in.

"[Reid] did not complain," Andrea Byrd wrote, another passenger on the plane who took the photo and posted it to Facebook. "He just told her that he was a dad, and wanted to help her so she could rest."

"He just kind of swooped in," Bryd told TODAY on Friday after the post had gone viral. "You usually don't see things like that. It was so sweet."

The post — which has been shared thousands of times all over social media — is a beautiful reminder that a simple act of kindness can make not just one person's, but thousands of people's days.

"It was such a relief because I was a little worried traveling with him without my husband there to help out," Nelson told TODAY. "I'm still very grateful — he was so kind."

And the perfect cherry on top of this heartwarming story, Nelson — a teacher who lives in Atlanta — learned that the friendly and fatherly stranger on the plane also has a son named Luke, according to the TODAY interview.

There a millions of easy ways to spread kindness that can make someone's day and this stranger's sweet gesture was exactly what the world needed right now, and may very well have inspired others to keep the goodness going.

"It's good to know the world is not all bad," Nelson told TODAY. "There are some really great people out there."