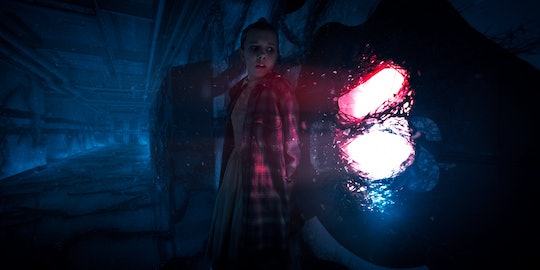 'Stranger Things' Has Been Renewed For Season 3, Already

Even though the second season of Stranger Things has yet to premiere, its insane popularity has already assured its future. There was a near-universal positive response to Season 1, with fans latching on to the show's 80s nostalgia, the well-intentioned kids at the heart of the story, its many meme-able moments, and, of course, Barb. The show made its mark on pop culture in a very short period of time, and now Stranger Things has been renewed for Season 3 already — even though Season 2 doesn't drop until Oct. 27.

Though the story is continuing in new episodes, those episodes are meant to feel more like a movie sequel than a second season. The first season did tie everything up for the most part, but it also left enough mysteries hanging to keep fans intrigued. It was Eleven's turn to be caught in the Upside Down after defeating the Demogorgon, with Will returned to his family — but potentially harboring something dangerous from his time away.

It sounds like series creators Matt and Ross Duffer have planned the events of the series well in advance; they even know when they want Stranger Things to end, and it seems as though Netflix is on board with letting their vision play out if the Season 3 renewal news is anything to go by.

If everything goes according to plan, then Stranger Things may end with its fourth season (which hasn't been announced, though it feels like a foregone conclusion). The Duffer brothers confirmed Season 3 to Vulture, with Ross explaining, "We're thinking it will be a four season thing and then out." By that point, the kids will have mostly grown up and changed quite a lot from the scrappy group of pre-teens viewers met in Season 1.

They'll also have been through more than their fair share of trouble by the time Season 4 wraps up, and maintaining a sense of reality — as much as they can in the show's science fiction world — was also a concern. It would be a little too unrealistic if the kids of Stranger Things were beset upon by horrible monsters year after year. "We just have to keep adjusting the story," Matt said to Vulture. "Though I don't know if we can justify something bad happening to them once a year."

Ross echoed that: "They're going to have to get the f**k out of this town! It's ridiculous!"

While it may be heartbreaking to imagine that Stranger Things only has a few years left before it's over, fans won't have to worry about it getting renewed. That much, at least, is assured.