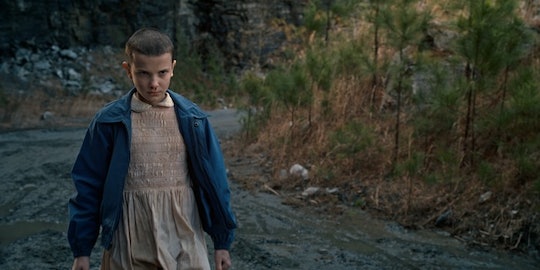 When thinking of Very Important Media for Parents, normally I wouldn't suggest a sci-fi, horror television show that is an obvious tip of the hat to both '80s coming-of-age flicks, as well as, basically every horror film ever. But as my partner and I inhaled the Netflix original series, Stranger Things, in two sittings (we used to be able to do eight episodes in one sitting but we can't now because Parenthood), I quickly realized that while Hallowe'en and Sloth from The Goonies will always hold a special place in the nostalgia compartment in my millennial heart, it was time to make room for something new, something better, something stranger.

Watching Stranger Things as a parent was strange indeed, especially because the show's creators, the Duffer brothers, created an Upside Down right there in my living room. A place where tired, old, and mostly gendered tropes and stereotypes are relegated back to the toxic, dead world where they belong. Now, I know what you're thinking: Can't you just watch a TV show (or a movie, or read a book, or have any type of human interaction) and not make it about feminism for once? And the answer is, yes, I can do that. But I also think that Stranger Things wasn't created in a vacuum, nor did I watch it in one. So, whether you want to admit it or not, Stranger Things, like all media, has the capacity to be both: simply entertainment and also feminist AF.

The thing that is so exciting about Stranger Things is that because it is set in the 1980s, I expected it to follow similar formats to TV and movies produced in or around that time. At the very least, I expected the writers to use the excuse that the setting should dictate character roles. Like how in past seasons of Game of Thrones, it seemed that the best reason to rape and kill off all the strong female characters was because it was a reflection of the medieval world they existed within. But that's not really what happened here. Instead, I found incredibly strong and surprising characters.

Joyce has become a champion for her children and turned the absentee-parent role that I expected to see swiftly on its head. She represents the type of parent that I want to be.

I thought Joyce was going to be this stereotypical '80s film mom: a single, working parent trying to work enough hours to pay the bills and seemingly oblivious to her children's goings on. Instead, we're shown via flashbacks throughout the show that Joyce is an incredibly engaged parent, despite the fact that she has to work all the time to keep her family afloat. She protects her sons: from the deadbeat father who refers to the missing, Will, as a "queer," among other homophobic slurs. And, later, when the time comes for Will to be retrieved from the Upside Down, Joyce insists on going with Police Chief Hopper. Now, to be fair, her character is aided by the fact that it doesn't take long for the white male, privileged cop to believe her stories about all the strange stuff she insists is happening in connection with her son's disappearance. But she's still an active participant in her child's search and recovery.

To our 21-century eyes this all seems obvious — of course a mother would help look for her child! — but when I look back to the flicks that ST pays homage to, Joyce has become a champion for her children and turned the absentee-parent role that I expected to see swiftly on its head. She represents the type of parent that I want to be... if I found out that my child had been abducted by a creature from another dimension.

It was so refreshing to see an imperfect teenage female character who has a lot more agency than I originally gave her credit for. Regardless of what her own mom might think, I would be proud to call Nancy my daughter.

Nancy was a come-from-behind favorite for me. First of all, she's the only person who seemed concerned that Barb (RIP) was missing. And then, she was the only person to, you know, do something about it. Nancy took everything I thought I knew about female lead characters in horror and dumped all that bullsh*t in the garbage. First of all, she was the "good girl," the straight-A student, referred to by her boyfriend, Steve's, friends as "perfect." So, of course I thought: well, she's not going to die. She's the Jamie Lee Curtis. Although, when we look at her treatment of poor Barb before the Upside Down monster snatched her, we see she was anything but. Nancy quickly confirms to us she's not as "good" as we thought, because she and Steve consummate their high school love pretty early into the show. And according to the horror-film formula as espoused by Scream, girls who have sex die — because that's a great message for young girls.

But Nancy doesn't die. In fact, Nancy kicks butt. First of all, Nancy has no shame about her sexuality, declaring to her judgmental and overprotective mother, "I slept with him!" — and that's a message I can get behind. She's the one who gets to hold the gun — and uses it well — rather than the tortured and misunderstood anti-hero, Jonathan. It was so refreshing to see an imperfect teenage female character who has a lot more agency than I originally gave her credit for. Regardless of what her own mom might think, I would be proud to call Nancy my daughter.

When I saw Dustin, I immediately identified him as the Chunk of the Stranger Things universe. He's chubby and sweet (he doesn't have his adult teeth! I just wanted to squeeze him!) but ultimately meant to be comedic relief, made fun of even within his own circle of outcast friends for being an overweight, toothless dork — an othered other. And he was, in fact, very funny. But he was also the glue of his group. He was the one who tried to keep everyone together, proclaimed Nancy to be "badass now" while at the same time searching for chocolate pudding. He was the one to rebuild burnt bridges and best of all, he was also the one to call his friends on their bullsh*t.

Here were three Dungeons & Dragons nerds who looked to a girl their own age — not a man, not an adult woman, not a buxom babe in a gold bikini with a magic whip — for help and, ultimately, salvation.

Instead of creating a dorky, overweight character who is physically and mentally weak, the butt of the joke that immediately makes us think of poor Chunk from The Goonies or Vern from Stand By Me, we're given an advocate for Eleven and an equal to Mike and Lucas.

But the character who really did it for me, the one who made me so excited to one day sit down with my own daughter to watch this show (not now, because she's 16 months old and I don't think a 16 month old needs a Demagorgon in her life) was, of course, Eleven. Eleven was the hero of the Stranger Things universe. She saved her friends, she saved the town, she saved the world. Three pre-pubescent boys turned to Eleven for help. Granted, she did have superpowers, but here were three Dungeons & Dragons nerds who looked to a girl their own age — not a man, not an adult woman, not a buxom babe in a gold bikini with a magic whip — for help and, ultimately, salvation.

But beyond their idolatry, Eleven's assurance in her self made me really excited to watch as a mom, especially as a mom to a girl. Eleven was scared, yes, of her abilities, because she knew her powers had the capacity to kill, to destroy. She understood the responsibility that came with them. But she was not some bumbling girl, some "Chosen One" trying to get a hold of her powers but falling flat on her face more times than she succeeded. Eleven was totally in control of herself. Maybe she didn't know how to interact with the outside world (because she'd spent her whole life in a government lab so I'll give her a pass) but she could kick grown up, adult, government, and Demagorgon ass with a well-placed glare and a flick of the wrist.

Stranger Things wasn't perfect. Obviously. The cast was particularly white washed; Lucas and Officer Powell does not a diversified cast make. And there was an abundance of homophobia in Stranger Things' dialogue. But after a summer of horribly sexist Olympic coverage, this show was a refreshing reset in a more progressive, open minded, and inclusive direction and when I compare it to the favorites that I grew up with, Stranger Things makes me feel excited and hopeful for what's to come.