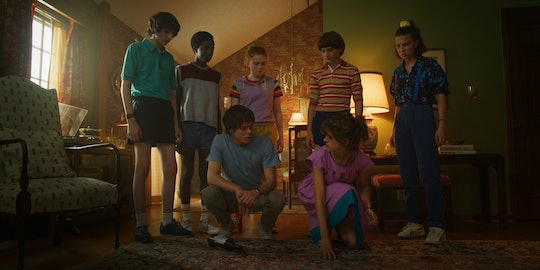 You Are NOT Ready For The New 'Stranger Things' Trailer

Your TV is about to get totally bodacious. Those kids of yours are going to have a cow over their lack of access to the main screen. Hopefully you caught both of the 80s slang references in there, otherwise you are probably wondering what's wrong with our editors. But, regardless of the like, major verbal nostalgia I am throwing at you right now, I have some exciting news: there is a new trailer for Stranger Things Season 3.

Things are still pretty weird in the town of Hawkins, Indiana. There's that whole Upside Down situation, Demogorgon's lurking in the shadows, and, you know, puberty. That's right, the Stranger Things kids — Mike, Eleven, Dustin, Will, Max, and Lucas — are growing up right before our very eyes. As if struggling with the revelation that girls don't actually have cooties wasn't enough, it looks like the gang is going to have to find yet another way to save the world. If only saving the world were something these kids could put on their official records, because it would likely put them on the fast track into their colleges of choice.

In addition to the endless 80s culture shock, it looks like the town of Hawkins is about to face it's biggest threat yet. As you can see, Eleven is blindfolded and using her powers again — though it's unclear exactly what prompts her to do so.

Once she discovers that Hawkins is once again extremely unsafe, the gang of teenage BFFs prepares for the fight of their lives. Of course they have a little hep from Chief Hopper, Will's mom, Joyce, and everyone's favorite love triangle: Jonathan, Steve, and Nancy.

Speaking of Steve, the latest trailer seems to reveal more details about what's going down at the shiny new Starcourt Mall.

If you've been paying attention, the mall seems to be a real focal point for Season 3. For starters, the very first look at the new episodes was released in July 2018 and was a commercial for the mall.

The commercial also revealed that a fan favorite character, Steve, is working there. If you watch the lengthy ad (which you can do by clicking here), you'll spot Steve in a sailor uniform behind the counter at Scoops Ahoy.

Later, in Dec. 2018, the official Twitter account for Stranger Things released the episode titles for Season 3 in a short video. Not one, but two titles — including the season finale — are mall-related. According to the video, episode two is called "The Mall Rats," while the season finale is called "The Battle of Starcourt." So, yeah, we should probably be paying attention to all things mall when it comes to Stranger Things this season.

Make sure to clear your calendar for when Season 3 of Stranger Things is released on Netflix on July 4. Hopefully you can finish the season before the fireworks show, but if not... well, there's always next year. (For the fireworks, duh.)