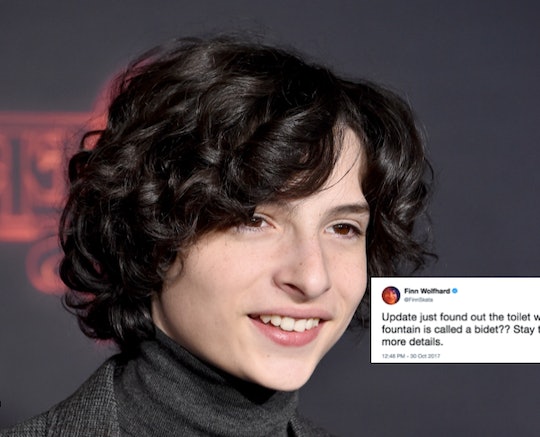 In a series of just three tweets, one of the kids from Stranger Things managed to start a melee on Twitter, all thanks to a simple misunderstanding. While everyone else was catching up on episodes they may have missed (or watching the new season for the second time; I don't judge), Stranger Things star Finn Wolfhard accidentally drank from a bidet. Accidents happen! But fans of the young actor on Twitter absolutely cannot handle the hilarity.

It was on a visit to France that Wolfhard first encountered The Bidet, soon to become the subject of the saddest, shortest short story you've ever heard (move over, Hemingway!). For consisting of only a few tweets, Wolfhard's altercation with The Bidet is truly a journey of twists and turns: discovery, mounting horror, and finally understanding. He learned something on this day, but, more importantly, he gave the Internet something to cackle over for days to come.

And cackle they did. It seems users on Twitter could not get enough of Wolfhard's mishap, either mining it for as much comedy as they could or expressing their helpless laughter with the assistance of an emoji or two. Fingers crossed that the rest of Wolfhard's sojourn in France went a little bit better than his introduction to the bidet.

This tweet truly captures the innocence of a young man who has not yet realized he drank from a toilet.

And there it is. That succinct "oh god" really says it all.

Early on, fans of Wolfhard who knew what he didn't (namely, that one should not sip from a toilet fountain under any circumstances, and also that bidets are basically aquatic toilet paper) only wanted to break the news gently.

But Then Came Laughter

However, the sitcom absurdity of the situation could not be ignored, so instead it had to be chuckled over. Again and again, if possible.

Say It Ain't So

Some could not contain their disbelief, however. They just didn't want to believe such a turn of events was possible.

It wasn't all about poking fun at Wolfhard or giving him a heads-up: some fans just wanted to pop the popcorn and enjoy from the sidelines as it all unfolded.

Then The Memes Began

Sometimes a moment is so purely, truly funny that the only way a person can express their joy is through the form of a gif or a meme. And when you're an actor who co-stars in some hugely popular properties, those gifs can get personal.

As personal as using a gif of one of Wolfhard's very own co-stars (in this case Jack Dylan Grazer from the 2017 remake of IT) to alert him to the health concerns of drinking from bidets.

Some fans responded to Wolfhard with gifs of himself. There's nothing like getting internet-teased by your very own face; that's gotta be tough. Whether it was another line from IT or Stranger Things' Mike Wheeler sputtering over a glass of milk, Wolfhard was getting the tea straight from his own self.

Wolfhard has yet to comment on #BidetGate since he learned the awful truth, but one can only hope that he is quietly recovering from the shock. Perhaps the entire thing was a well-crafted Twitter joke, which would really be the best outcome because it would mean no eau de bidet was used as a nice afternoon refreshment. But even if it was, no harm, no foul: if one can learn from a situation, then it has served a purpose. In this case, the lesson is not to drink from anything in a bathroom that's not a sink.