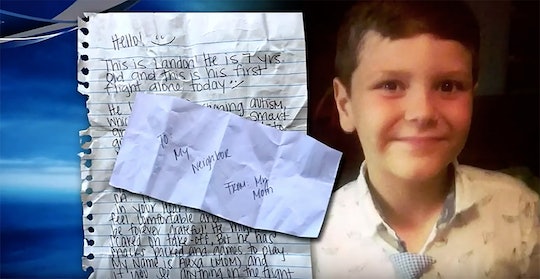 If you're anything like me, the dumpster fire that is the 24-hour news cycle can leave you feeling pretty down about the state of humanity. And given all of the recent negativity, I can't help but appreciate this stranger's message to the mom of a boy with autism. Spoiler alert: There's a good chance it will make your day.

Here's the story, in a nutshell: Alexa Bjornson's son, Landon, recently flew solo for the first time from Las Vegas to Oregon to visit his dad, as USA Today reported. Because her 7-year-old is high-functioning on the autism spectrum, Bjornson was concerned that his tendency to repeatedly ask, "Are we there yet?" would be a burden to the person sitting next to Landon on the Southwest Airlines flight. So, the thoughtful mom decided to send a note with Landon explaining that he has autism — along with $10 — for her son to give to his seatmate.

"I thought, 'How do I make it so whoever's sitting next to him won't look at him as a burden but more of like, I can help this kiddo get through the day,'" Bjornson told KATU. Talk about a creative mama.

Landon ended up sitting next to a man named Ben Pedraza — who sent Landon's mom a reassuring text about his flight with her 7-year-old, CNN reported. In the text — which Bjornson shared in a now-viral Facebook post (it has received 36,000 likes and over 14,000 shares as of Monday) — Pedraza included a photo of himself and Landon, as well as an inspiring message.

“My name is Ben. I was Landon’s seat neighbor for his flight to Portland," he wrote. "He did ask if we were there yet several times but he was a great travel buddy. We had a good time and played a few rounds of rock-paper-scissors. He’s a great kid and you’re a lucky mom. I appreciate the $10 but it wasn’t necessary. I donated it to Autism-Society.org in honor of Landon.”

After the heartwarming story started going viral, Pedraza shared that he and his newfound travel buddy were also kidding around during the flight — until Landon asked him to stop. “We were cracking jokes, and after a while, he asked me to quit making dad jokes," he told KATU. LOL.

The awesomeness of this kind stranger didn't escape Bjornson. "I am so grateful to this individual, and that there are still kind people in the world who make a difference like I try myself to do as well," she wrote on Facebook. "Thank you so much Ben!!!!"

Seriously, though. Did Landon hit the flight seat partner lottery, or what? News stories involving flying and children are almost always negative — whether some stranger screamed at a toddler for acting like a toddler. Or a flight attendant forced a mom to breastfeed in the bathroom. Or a family was removed from a flight because of their crying baby. Not only did this stranger talk to and play games with a 7-year-old, he also refused to keep the money for himself — and instead paid it forward to a cause that actively works to help people like Landon.

Shoutout to Ben Pedraza for making this family's day and mine — along with at least 36,000 others so far.