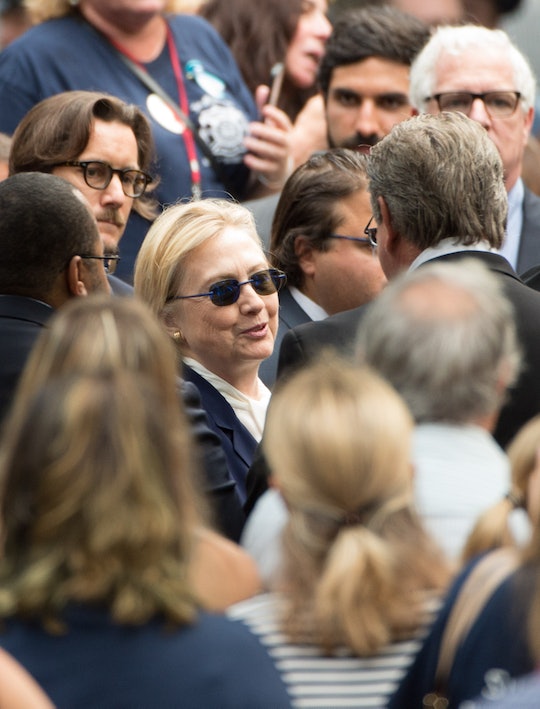 Only a few hours after an overheated Hillary Clinton was captured on camera wobbling as she left a 9/11 memorial early in Manhattan on Sunday, it appeared that she had made a full recovery as she left her daughter’s apartment where she was resting. However, it was later revealed that the Democratic nominee was diagnosed with pneumonia on Friday, and internet conspiracy theorists flooded social media feeds with the idea that the presidential candidate was using a body double — or Clinton lookalike Teresa Barnwell specifically — immediately upon hearing the news. Some of the strangest #HillarysBodyDouble tweets began firing off soon after.

Clinton’s continued to dominate headlines on the 15th anniversary of 9/11 after she subsequently canceled a campaign fundraising trip to California that had been scheduled for Monday and Tuesday. The rumors really began to go viral after internet detectives found it was odd that only hours after collapsing, Clinton was spotted smiling and healthy, hugging a little girl, and most notably, not surrounded by secret service agents or a doctor wasn't nearby.

Barnwell — who has been a Clinton impersonator for 23 years — may have added a bit more buzz to the rumor after she posted a picture she had previously taken of herself in front of Chelsea Clinton’s apartment, with the caption, "Maybe I was in New York today!" The photo, which was posted on Sunday, has since been deleted after Barnwell found herself at the end of ugly comments and vicious conspiracy theories. Late Sunday night she had to set the record straight with another tweet:

Despite Clinton’s doppelganger's attempts to calm the Twitter storm, #HillarysBodyDouble was still trending on Twitter at press time.

Here are of some of the strangest, most bizarre, and hilarious ones thus far:

And quite possibly one of the most important points:

The 68-year-old's health has been a hot topic in the conservative media lately. Many have speculated about the root of a Clinton's coughing fits caught on camera in recent weeks, while others have claimed her medical episode on Sunday was actually a seizure. (Clinton's doctors, for their part, have never hinted that the wobbly episode was anything but a bout of heat exhaustion.)

On Monday, Clinton's presidential campaign acknowledged that it had mishandled the health scare and promised to release more medical details soon, after drawing criticism for waiting two days to reveal the Democratic candidate's diagnosis.

"I think that in retrospect, we could have handled it better in terms of providing more information more quickly," Clinton spokesman Brian Fallon told MSNBC on Monday.

#HillarysBodyDouble is surely one of the most bizarre conspiracy theories of the election season yet. And although it's been pretty wacky political year already, the internet has just proven that this election is completely capable of getting even crazier.