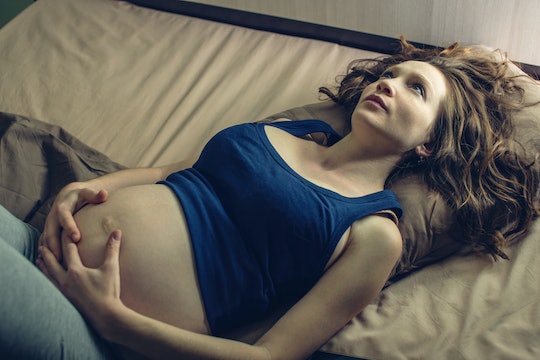 Babies do a lot more than kick in the womb. They are rapidly growing and developing in ways that mom isn't even aware of. Everything from a mother's diet and water intake to exercise impacts that development, for the good and the bad. Maternal stress during pregnancy affects babies' brains, according to a recent study. Reducing that stress during pregnancy is an important part of making sure your baby is happy and healthy.

Led by Moriah Thomason of Wayne State University, researchers examined evidence from in-utero fetal brain scans and found that prenatal stress physically affects brain development. The unborn child's neural connectivity is changed by that stress. Thomason explained to Science Daily that their findings are the first of their kind. "It has long been thought that the stress of a mother during her pregnancy may imprint on the brain of her developing child," she said.

Researchers used fetal resting-state fMRI to examine the brains of 47 human fetuses scanned between the 30th and 37th week of gestation. Participating mothers in the study came from a low-resource and high-stress urban settings, Science Daily reported. Many of them reported high-levels of depression, anxiety, worry, and stress during pregnancy. Those mothers who were stressed had fetuses with reduced efficiency in how their brains were wired.

Thomason went on to stipulate that it isn't clear how these changes impact future health and development, but the findings are important nonetheless. While these are the first findings to pinpoint physical changes caused by maternal stress during pregnancy, they are far from the first to suggest that such stress can impact the unborn child.

A 2007 study published in the journal Clinical Endocrinology found that stress during pregnancy can impact the fetus as early as 17 weeks after conception, having potentially harmful effects on brain development and behavior, including lowering the child's IQ, according to The Guardian. This study did not pinpoint how the changes occur, or the future implications for the child.

Along with impacting fetal brain development, prenatal stress has been shown to increase a mother's chances of having a premature baby — defined as one born 37 weeks of pregnancy — or a low-birthweight baby — one weighing less than five and a half pounds, according to March of Dimes. Both of these types of babies are at an increased risk for health problems later on in life.

Thomason told Science Daily that her study's findings underline the importance of reducing stress during pregnancy:

We must consider the developing brain in context, thinking about the role of the environment in shaping the brain. It is a topic that inspires us to promote healthy brain growth, to ask what it is that we do for children in the lifestyles, opportunities, and learning conditions we create for them.

For those expectant mothers looking to lower their own stress levels, The Bump offers a list of suggestions. Getting enough sleep, although difficult during pregnancy, can reduce stress. Additionally, warm baths, prenatal massages, and exercise can help you stay calm. Other recommendations include reading, swimming, and meditation.

Perhaps most importantly, expectant mothers shouldn't be afraid to ask for help when they need it. Creating a support system for pregnancy and parenthood alike can go a long way towards making life easier for a new mom.

A certain amount of stress during pregnancy is unavoidable. There's the endless changes to a mother's body and all of the budgeting and preparation — not to mention the hormones. But findings such as these provide mothers with the information necessary for them to make the best choices for their growing baby.

More Like This
New Study Finds Moms Who Earn More Than Their Husbands Also Do More Housework
Spain Could Offer Up To 5 Days Of Menstrual Leave A Month & It'd Be A Game Changer
Here’s How To Fight For Abortion Rights
Is Glycolic Acid Safe During Pregnancy? A Dermatologist Explains