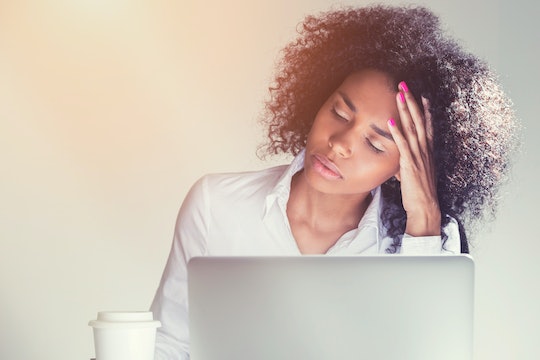 Turns Out, Stress Might Actually Be Contagious, According To A New Study

When you love someone, you share a lot with them — your food, your secrets, your saliva. But it turns out there's one thing you may be giving your partner unknowingly, and they probably don't want it. According to a new study, stress might actually be contagious, so much so that it can actually change your brain activity.

Researchers from the University of Calgary in Canada published a study in the March 2018 issue of Nature Neuroscience, in which they observed pairs of male or female mice. They took away one mouse from each pair, exposed it to some mild stress, and then returned it to its partner. Then, the researchers studied the brain cells in each mouse. The mouse who had been exposed to stress demonstrated the expected cell change in its CRH neurons (which are the neurons that control the brain's response to stress). But, remarkably, so did the partner mouse.

Toni-Lee Sterley, the study's lead author, said, "There has been other literature that shows stress can be transferred — and our study is actually showing the brain is changed by that transferred stress,” according to an article in UToday. “The neurons that control the brain’s response to stress showed changes in unstressed partners that were identical to those we measured in the stressed mice."

Sure, this study only used mice, but the researchers hypothesized that the results could be applicable for humans as well.

The results are significant, even if they aren't entirely surprising. On a very basic level, of course a loved one will act differently when they are stressed than when they're feeling all nice and relaxed, and unless they are extremely skilled at burying their feelings, you'll probably notice and feel the difference. They might have less patience, or be less kind to you. But even if they aren't, you'll likely start to worry about them anyway, assuming that you're an empathetic person, and that will not be particularly great for your own stress levels. For many people, it's an all too familiar situation, one that might crop up when, say, things are particularly rough at a partner's work environment.

But it can also crop up in more extreme situations. Take soldiers who return from active duty with Post Traumatic Stress Disorder (PTSD). The harmful effects of PTSD aren't always just limited to the person who experienced the trauma firsthand. As the U.S. Department of Veterans Affairs notes, people supporting a loved one with PTSD can also experience a kind of trauma, and even begin to display certain symptoms of PTSD themselves. This new study could help provide more evidence that such a sympathetic response is based in actual brain chemistry.

As the study's co-author, Professor Jaideep Bains, said according to The Daily Mail:

We readily communicate our stress to others, sometimes without even knowing it... On the flip side, the ability to sense another's emotional state is a key part of creating and building social bonds... Brain changes associated with stress underpin many mental illnesses including PTSD, anxiety disorders and depression.

So, it's not great that stress can be so easily transferred. But also, it's a sign that people are able to care deeply about one another and really empathize, so hey, at least that part of it is good?

That stress is contagious may not be a fun finding, but it's definitely important to know about. When you're taking care of a loved one who is going through a stressful time, it's a perfectly valid response for you to start feeling bad, too. And if that happens, it's more than OK for you to take the necessary steps to care for yourself, instead of dismissing your own emotional reaction.

More Like This
I Took Drinking Out Of My Bedtime Ritual & Unfortunately, It's Great
Why Is My Discharge Brown? Experts Explain
Why Is My Vagina Itchy? Experts Explain
Here's Why Your Vagina Burns After Sex
What Parents Are Talking About — Delivered Straight To Your Inbox