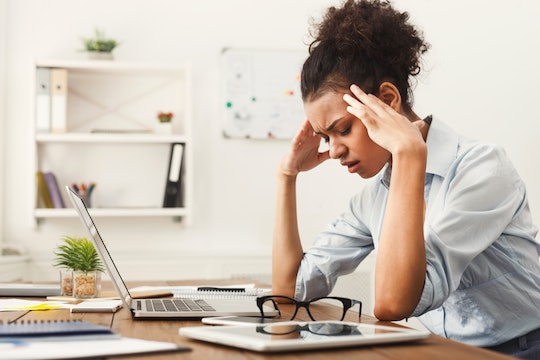 Stress May Be Increasing Type 2 Diabetes Risk In Women, According To New Study

Stress can impact a lot of things in your daily life, from your relationships to your mood, but what about your physical health? Most people know that stress can have some short-term implications, but its impact extends farther than might have been previously realized. According to a new study, stress might be increasing type 2 diabetes risk in women, and it points to the need to understand how mental health impacts our bodies.

Most people with diabetes have type 2 diabetes. With type 2 diabetes, people who have it make insulin, the hormone that comes from your pancreas, but their cells aren't able to use it as well as they should, as outlined by WebMD. As a result, Web MD noted, the pancreas will make more insulin to get glucose into the cells but at some point, it won't be able to work efficiently enough, and sugar will accumulate in your blood instead.

A report by the Centers for Disease Control and Prevention (CDC) found that, as of 2015, 30.3 million Americans, or just over nine percent of the U.S. population, have diabetes.

Traditionally, type 2 diabetes was thought to be caused by being overweight or inactive, or due to age or family history. Now, researchers are looking into an additional potential cause.

A new study looked at data on 22,706 female health professionals participating in the Women's Health Study with an average age of 72 and who didn't have heart disease, according to the American Heart Association.

Researchers followed the women for about three years, collecting data on all manner of stress, and found, according to the American Heart Association, that stress from traumatic events, as well as long-term stress at home or work, resulted in nearly a doubling in their risk level for developing type 2 diabetes, according to the American Heart Association.

With Americans reporting increasing anxiety and stress, noting the potential risks that might have in other areas of health is incredibly important. According to the Anxiety and Depression Association of America, approximately 40 million American adults have an anxiety disorder.

The study's lead researcher, Jonathan Butler, said, according to the American Heart Association:

Older women, and women in general, may sometimes be left out of discussions around diabetes, but it does commonly impact them, too. About 15 million women in the United States have diabetes, according to the Office On Women's Health, which equals about 1 out of every 9 women.

Dr. Sherita Hill Golden, professor of medicine at the Johns Hopkins University School of Medicine in Baltimore, said, according to the American Heart Association:

"We know that lifestyle intervention works for diabetes prevention, but that can be challenging if people experience cumulative stressors ... It's important to assess and understand a patient's social history. They may need a referral to a counselor or social worker."

This study points to the need to start considering how stress affects people's bodies beyond what people may currently understand. By taking stress into account, doctors will be able to approach patients about prevention efforts that actually makes sense for them.

More Like This
Banana Boat Sunscreen Has Recalled Products That Were Found To Contain Benzene
New York Can End Religious Exemptions to Vaccine Mandates, Says A Federal Appeals Court
Everything Parents Need To Know About Monkeypox
How Hot Is Too Hot For Babies? Experts Weigh In