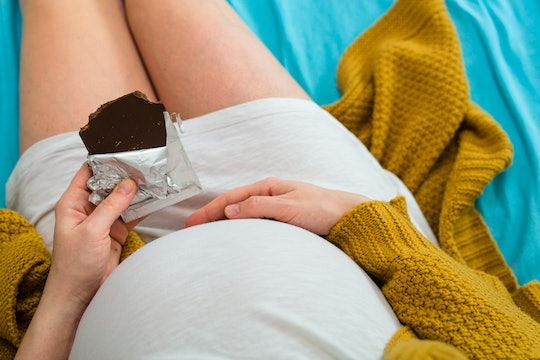 Stressed Moms Should Be Eating More Dark Chocolate, According To Science

Stressed out from so much running around like a chicken with its head cut off? You're not alone, and science has got your back. So much so that science is actually advocating for you to reach for that chocolate bar. Yup, new, exciting research says there might be some health benefits to eating certain types of dark chocolate. For one, it could reduce your stress levels. So go on — you need it. And it's actually kinda good for you.

OK, sure, this is not the first time research has suggested that dark chocolate is "good for us." According to Healthline, dark chocolate contains a "decent amount of soluble fiber and is loaded with minerals," so it actually has nutritional value. Moreover, Cocoa and dark chocolate even contain more antioxidant activity, polyphenols, and flavanols than some fruits, Healthline reported. Plus dark chocolate can improve blood flow and lower blood pressure, it raises HDL and protects LDL against oxidation, and it can also reduce insulin resistance, a common risk factor for many diseases like heart disease and diabetes. Oh, and it can protect your skin from the sun and improve brain function, too. Add to all that that dark chocolate just tastes good, why wouldn't you be eating more of it?

So, yes, there's a lot of information already out there that supports dark chocolate indulgence. But, Science Daily reports, while it is well known that cacao is a major source of flavonoids (and the aforementioned health benefits come of that), "this is the first time dark chocolate's effect has been studied in human subjects to determine how it can support cognitive, endocrine and cardiovascular health."

Lee S. Berk, associate dean of research affairs at the School of Allied Health Professions and a researcher in psychoneuroimmunology and food science from Loma Linda University, lead both studies, Science Daily reported.

"For years, we have looked at the influence of dark chocolate on neurological functions from the standpoint of sugar content — the more sugar, the happier we are," Berk said, according to Science Daily. He noted that this is the first time research has looked at the impact of large amounts of cacao in doses as small as a regular-sized chocolate bar in humans over short or long periods of time.

His findings were just presented at the Experimental Biology 2018 annual meeting in San Diego, and they showed that consuming dark chocolate that has a high concentration of cacao (minimally 70 percent cacao, 30 percent organic cane sugar) has positive effects on stress, memory, mood, immunity, any inflammation.

But this doesn't mean you should go around hoarding all the chocolate. According to the findings, the chocolate you should be consuming needs to have a cacao percentage of at least 70 percent in order for the benefits to work their magic, Mirror reported.

Now pause. Let's let's not get too ahead of ourselves. Lest we all forgot: Chocolate is still a candy. And much of the chocolate research out there has actually been funded by none other than chocolate companies that, of course, are pushing their products, according to Vox. So even if dark chocolate really does have positive effects on us, we should probably stick to our parents' rule of everything in moderation.