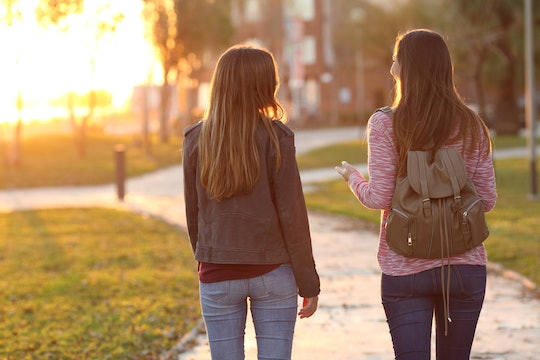 Teen Friendships Might Matter More Than You Think, According To A New Study

Everyone wants their kids to grow up healthy, happy, and having strong emotional ties, but, according to new research, same-sex friendships in your child's teen years seem to be absolutely crucial. In fact, according to this new study, strong teen friendships may be key to healthy romantic relationships later.

Researchers at the University of Virginia and James Madison University followed 165 teens from the age of 13 up to 30, checking in with them once a year, in order to conduct the study, according to Science Daily.

The teens, who lived in both suburban and urban areas in the southeastern United States, represented a diverse mixture of racial groups and socioeconomic levels. When checking in with researchers, kids shared how their relationships (friendships or otherwise) were going, and close friends were also asked to weigh in on participants' progress, according to the study's abstract. And over the course of three years in their 20s, they were asked about romantic relationships as well.

What resulted was confirmation that teens who mastered social development within their own gender had a higher chance of having satisfying romantic ties by ages 27 to 30.

"In spite of the emphasis teens put on adolescent romantic relationships, they turn out not to be the most important predictor of future romantic success," Joseph P. Allen, a professor of psychology at the University of Virginia and the lead author of the study, said, per Science Daily.

"Instead, it's the skills learned in friendships with peers of the same gender — skills such as stability, assertiveness, intimacy, and social competence — that correspond most closely to the skills needed for success in adult romantic relationships," Allen added.

Even more interesting, the study broke down the parameters by which teens needed certain skills in order to thrive romantically later, including the fact that by 13, a teen who has positive expectations of relationships with friends is predicted to have future romantic satisfaction.

By 15 and 16, social competence — the ability to form close friendships and to also interact effectively with general peers who may not be besties — was the best indicator, the study noted.

As the UK's Daily Mail reported on the study, those satisfied in their adult relationships by age 30 generally enjoyed better same-sex friendships during their school years, including those who held onto the same best friend from the ages of 16 to 18.

Absent from this list is such parental-worry factors as sexual behavior in the teen years. "Romantic relationships in adolescence are much more likely to be fleeting, and as such, they don't appear to be the main way teens learn skills needed for the future," Rachel K. Narr, a doctoral student at the University of Virginia, who helped write up the findings, said, according to MindBodyGreen.

Teen friendships are the perfect testing ground for future intimate relationships, dealing, as they do, with such issues as communication when either or both parties are stressed, and learning to be assertive as far as your own needs, as MindBodyGreen noted about the 17-year-long study.

The study, funded by the Eunice Kennedy Shriver National Institute of Child Health and Human Development and the National Institute of Mental Health, really puts a whole new spin on the importance of encouraging kids to build healthy friendships with peers. Something to remember when, as a busy parent, I think I don't have time to arrange that playdate.