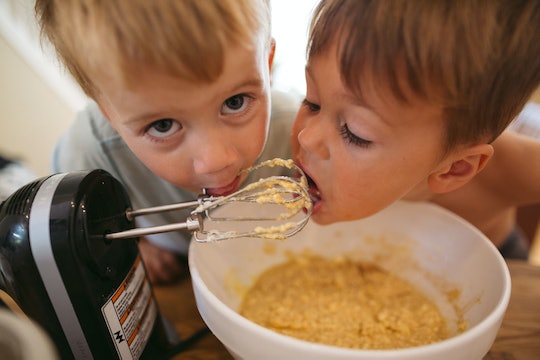 How To Quit The Bribery Business With Your Kids

I asked my daughter to put her clothing into the dirty laundry hamper. She looked at me, waiting. “Two chocolate chips,” I said. “Four,” my 7-year-old countered. We settled on three. I’m hoping that my daughter’s “negotiating” skills will help her in a future career as a lawyer, or maybe even as a hostage negotiator. Realistically, bribery is the only way I can convince my kids to do everything from practicing the piano (two cookies, with a bonus cookie if they do it without complaining), reading (10 minutes of electronics time) and bringing me their dishes (dessert post dinner).

It all started oh, so, innocently with potty training, which was a disaster.

“Give her some candy,” seemingly helpful friends suggested. Little did they know, their suggestions would spark a pint-sized monster, who’d require something for everything. After all, my little nugget figured, if she could score candy for simply pooping (we went through pounds of M&Ms to convince her of this), which she did naturally, what else could garnish a sweet prize?

Taking a shower when she’d rather be playing? Yup.

Leaving the house when she’d prefer a pajama day? Check.

It appeared that just about everything could result in an award.

Good for her, easy enough for us.

But were we creating a monster?

“It teaches kids that they are able to have control over their parents in situations, to expect to be given something in return for compliance and manipulation,” Hendon says.

So what should I do?

Apparently, I have a few choices.

I can provide my daughters with options instead of telling them what to do, Hendon offered. For example, younger children may be given the choice of leaving the park now or leaving in five minutes. Or, they could choose between drinking milk or water. Older kids could decide which homework assignment they’d like to do first, or what they’d like to help with for dinner.

It teaches kids to expect payment for the behavior you should expect of them anyway.

And if they don’t like any of their options (my kids appear to be, let’s say, somewhat difficult?)?

“If they don’t make a decision, make one for them and help them follow through,” Hendon says.

I still think that bribing is easier. But Elisabeth Stitt, of Joyful Parenting Coaching in Mountain View, California, says that in general, bribing kids is ineffectual, and hurts your relationship with your kids.

“It teaches kids to expect payment for the behavior you should expect of them anyway,” Stitt says.

But it can be used for one-off, very concrete events.

If you’re planning a night out and there’s a new babysitter, then the promise of a special treat can help your child focus and regulate her emotions enough to give the babysitter cooperation, Stitt says. Likewise, even with a regular sitter, there might be special allowances to regular rules, like getting to watch more TV than usual.

Bribes are totally fine with potty training, too — but once potty training is over, you can let your child know that the treat was just for training purposes, Stiff says.

“I also make a distinction between bribes and a positive consequence,” she says. “Let’s say that you can making dinner and you would love some help preparing the vegetables. You might say, ‘If I were to get help in the kitchen and could get dinner in the oven by 6 p.m., I would have 20 minutes to play Uno.’”

In this case, you are requesting, but not demanding, cooperation from your children. If they step up to the plate, they will be rewarded by playing — and your time and presence are always the best reward.

Time with a parent is always win-win because instead of reinforcing greed for a sweet or toy, it gives parent and child a chance to connect and have fun.

You can also use positive consequences randomly, Stitt says.

If pick-up from preschool goes smoothly at a time when your children have been fighting getting into their carseats, you can announce that picking up was so peaceful that you have extra energy to play pirates.

“This is not a bribe because it is random and it is given afterwards,” Stitt says. “Also, time with a parent is always win-win because instead of reinforcing greed for a sweet or toy, it gives parent and child a chance to connect and have fun — a critical tool for getting kids’ cheerful cooperation.”

Still, bribing is still useful if you need immediate compliance, though it comes at a cost, says Michelle Carlson, certified parenting coach and counselor, former teacher and mother of two.

Bribes are essentially a manipulation, and most people — even kids — don’t like to feel manipulated, so that feeling might decrease cooperation in the long run.

“Additionally, we would like to get to a point with our kids where they choose to do the right thing intrinsically because it is the right thing to do not because they are awaiting a prize,” Carlson says.

My kids may eventually do the right thing without demanding a prize? I may just have been convinced to stop bribing. I feel like it’ll be a bit of an adjustment, sort of like the time I stopped swaddling them, only to end up not sleeping for a week . . . followed by longer and longer stretches of rest.

I guess that’s what parenting is: experimentation at its best. But the great thing about it is that even when you mess up (when I bribe them all. the. time, for example), you can always get a do-over.