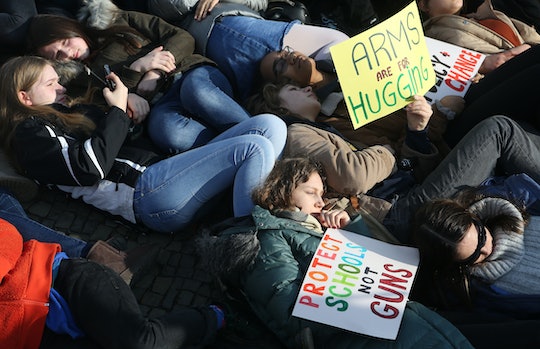 Seventeen lives lost at Parkland. 26 lives lost at Sandy Hook. 32 lives lost at Virginia Tech. 13 lives lost at Columbine. 58 lives lost at an outdoor concert in Las Vegas, Nevada. 49 lives lost at Pulse Nightclub in Orlando, Florida. 25 lives lost at a church in Sutherland Springs, Texas. The list, sadly, can and does go on, and the post-9/11 generation has become accustomed to mass shootings and a culture that perpetuates gun violence. But on Saturday, March 24, students from around the country said #NeverAgain. Students attending the #MarchForOurLives spoke with Romper and shared the heartbreaking things they tell their parents before school every morning, not only to highlight how instances of mass violence have become intertwined with their educations, but to show that they're fed up with it. They're fed up with all of it.

"In just a few weeks’ time, we, the youth of the United States, have built a new movement to denounce gun violence and call for safety in all of our communities," Parkland student-turned-activist Emma González writes in an exclusive op-ed for Teen Vogue, one day before an estimated 500,000 students marched on Washington, D.C. to demand gun reform. "Young people in this country have experienced gun violence for their entire lives, only to be faced with a number of representatives and officials who have been seduced by the gun lobby or have generally failed to make effective change." The prevalence of school shootings in this country is made even more overwhelming when students who've survived share text message exchanges with their parents. Miami Herald reporter Chabeli Herrera tweeted a conversation between student Sarah Crescitelli and her parents. Crescitelli wrote, "If I don’t make it I love you and I appreciated everything you did for me.”

The idea that a child will go to school and never come back home is no longer far-fetched or out of the realm of possibility. It's a reality many parents, and students, have been forced to face, and one the rest of us have tried so desperately to keep ourselves from considering. Parents are afraid to send their children to school, and students are afraid to sit in their classrooms and learn. So while hundreds of thousands of students march for common sense gun laws and the right to get an education without the fear of being shot and killed, the following students shared what they feel they must tell their parents every morning before they leave for class. This is the world our children live in. This is the world they're working to passionately to change.