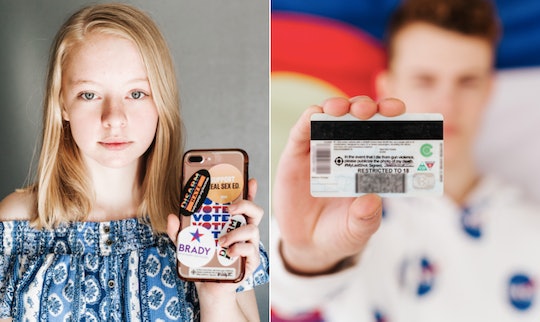 "Please Publicize The Photo Of My Death": How These Students Aim To End Gun Violence

In the wake of a horrific mass shooting, most of the media will try to report the graphic nature of these senseless acts of violence as sensitively as possible. Out of respect for the victims and their loved ones, sharing photos or videos of the crime scene is often discouraged. But the students behind the #MyLastShot campaign want the opposite done if they're ever victims of gun violence — they want the world to see the photos of the grim reality of this nation's epidemic of gun violence and the innocent lives it has claimed.

The gun violence prevention project #MyLastShot was started by activists and students from Columbine High School in Littleton, Colorado, where 13 people were murdered in a mass shooting on April 20, 1999. Since then, mass shootings have become deadlier and have been happening more frequently, according to a data analysis from The Washington Post, which noted that in recent years, on average, a mass shooting has occurred roughly every 47 days in the United States.

In less than 24 hours, in one weekend in August, more than 30 people were killed in mass shootings in Dayton, Ohio, and El Paso, Texas. These horrific events ignited a heated debate on gun control, with many calling on politicians to enforce stricter gun safety measures. However, the mission behind #MyLastShot is not entirely focused on legislation; instead the project's site says it's focused on starting necessary conversations and believes the "graphic images have the ability to incite change."

"#MyLastShot gives people a choice and a voice in the case that they do become a victim of gun violence," Columbine High School senior Kaylee Tyner says on the site. "They can choose what they want to happen to them if they are to die."

To get involved in the #MyLastShot campaign, the organizers call on the public, if they wish to participate, to place a sticker on an item that's typically always with you, like your phone or license. You can either order or print the sticker (or make the text the lock screen on your phone), which reads: "In the event that I die from gun violence, please publicize the photo of my death."

The youth organizers are inspired by the "graphic imagery" of 14-year-old Emmett Till, who was brutally murdered in August 1955 in Mississippi after he was accused of flirting with a white woman. Till’s mother chose to have an open casket at his funeral and photos of his beaten, swollen body were later published, "reigniting a widespread passion for the Civil Rights Movement," according to the Smithsonian Magazine.

As the #MyLastShot organizers point out, those graphic images, while shocking and unsettling to see, "helped create change because it didn’t censor the truth."

Tyner is aware that the #MyLastShot project is "a pretty controversial one," as she told the Colorado Sun in March. "But that’s because it truly makes people uncomfortable with the realities of gun violence," she explained to the publication. "And that’s our goal. Gun violence in this country has been very normalized and people have become very comfortable with it... We hope to spark conversation around the truly horrific realities around gun violence."

Of course, the organizers "hope that #MyLastShot will never have to go into full effect," as they state on the site, but they hope the project as a whole is enough to make "a shocking point to those in America who continue to be complacent to the country’s gun violence epidemic."

And many have already shown their support for #MyLastShot, with people sharing photos of their stickers on social media. "Please, politicize the hell out of my death if I die by gun violence," one such supporter tweeted along with a photo of their ID card with the sticker placed on it. Another shared on Twitter, "I refuse to be another forgotten statistic. Another prom photo in a memorial. Maybe just maybe #MyLastShot can make a difference..."

#MyLastShot also has the support of several politicians, including Colorado Rep. Tom Sullivan, whose son was killed in the Aurora theater shooting in 2012, and Colorado Sen. Julie Gonzales.

These students' bravery and motivation to spark necessary change is truly remarkable. But, as TIME's Fred Ritchin pointed out, #MyLastShot also "reveals a disturbing truth: that high school students may foresee their own deaths in what should be the safest of space."

America's youth should not have to live in fear or be thinking about an untimely death, yet it's the nation's teens — like the students from Marjory Stoneman Douglas High School who organized the March for Our Lives demonstration after a mass shooting at their own school left 17 dead — who are taking bold swings to try and make a difference because previous generations haven't.