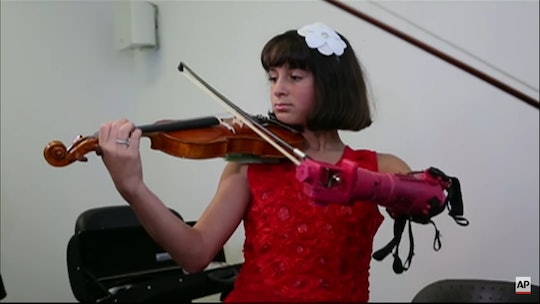 A young girl from Virginia, who was born without a left hand and a severely abbreviated forearm, can continue to pursue her musical ambition to play the violin after a group of undergraduate students designed a prosthetic arm for her with the help of a 3D printer. A video of the heartwarming story published by the Associated Press on Saturday show 10-year-old Isabella Nicola Cabrera trying out the hot pink prosthetic design and successfully holding a bow to play the violin.

The AP reported that the fifth-grader’s music teacher had built her a prosthetic to play with initially, but it was too heavy for her. So, he reached out to a group of bioengineering students George Mason University, his alma mater, and asked them to come up with something better for the young girl. They reportedly developed multiple prototypes throughout the year, which she tried out, but the latest model was a win for all: It was comfortable for Isabella to wear and provided her the range of motion she needed to move her bow appropriately on the strings and the students’ success with the project gave them the green light to graduate this year, as the AP reported.

"It's sort of a lot of pressure," Abdul Gouda, one of the students who designed the prosthetic, said. "You've got this young girl who's counting on you and you're expected to deliver."

And they totally delivered. "Oh my gosh, that’s so much better," Isabella said when she tried on the new attachment.

Watch the heartwarming moment in the video below:

Although Isabella was born without the majority of her left limb, she told the AP that she was determined to play the instrument ever since her school began offering strings lessons in fourth grade — and her mom was nothing short of supportive.

"I've never told her no. I told her we would try," her mother, Andrea Cabrera, told the AP. "There was no guarantee the school would be able to do an adaptation. Through these little miracles, it kept going forward."

And thanks to the brilliant and creative minds of these students, Isabella is able to pursue her passion. But she wasn't worried. "I felt right away that I'd be able to play," she told the AP. "I've always had perseverance."

"I feel very blessed that I have this amazing group of people," the young violinist told AP, who had also been surprised by the students with an additional attachment designed to let her grip a handlebar so she can ride her bicycle with comfort and ease as well. As if this story wasn't sweet enough already.